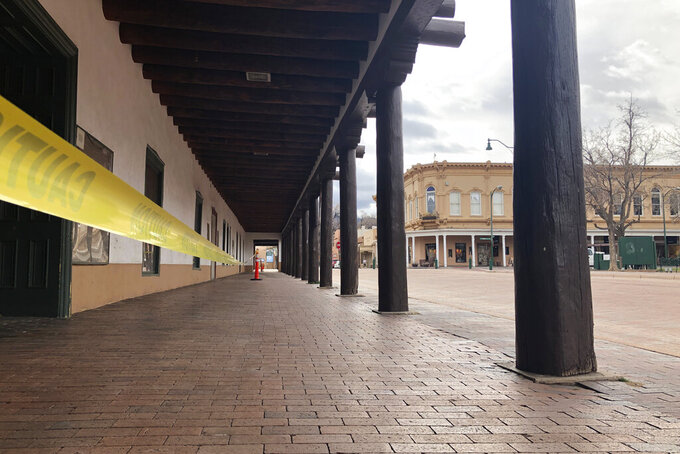 An empty central plaza and shopping district is shown amid a public health order that has closed down most retail stores and suspended dine-in restaurant service in Santa Fe, N.M., Friday, March 27, 2020. New Mexico Cabinet Secretary for Tourism Jen Schroer says the state's tourism industry will continue to suffer amid COVID-19 restrictions and vowed the state will do what it can to help hotels, tourist spots, and businesses recover once restrictions are lifted. (AP Photo/Morgan Lee)

The continuing surge in applications in one of the poorest states in the U.S. was a striking indication of the economic damage the COVID-19 outbreak is inflicting across the U.S. State officials have imposed tight restrictions or forced closures on non-essential businesses to stop the spread of the coronavirus.

According to the U.S. Department of Labor, New Mexico saw 28,182 people apply for unemployment benefits last week compared to a record 18,105 the week before. Filings for unemployment aid generally reflect the pace of layoffs.

In its report, the Labor Department said more than 6.6 million Americans applied for unemployment benefits last week — doubling a record set just one week earlier — a sign that layoffs are accelerating.

The U.S. economy has now had 10 million people applying for benefits in just the past several weeks.

New Mexico’s Workforce Solutions Department that oversees unemployment in a state of 2 million residents says phone lines were overwhelmed by more than a half-million calls in one day as the federal government prepared to expand unemployment coverage to independent contractors, the self-employed and gig economy workers. It was too soon this week to process those claims.

It is unclear when the state agency would begin accepting applications from independent workers. Workforce Solutions Secretary Bill McCamley participated in a teleconference Thursday with U.S. Labor Secretary Eugene Scalia and expressed frustration afterward that guidance was not provided on federal documentation requirements that are needed to extend benefits to self-employed and gig economy workers.

“We’re waiting on their guidance to figure out the mechanics,” McCamley said. “It’s still going to take a few weeks when we get that.”

He estimates that 62,000 New Mexico residents may quality for the extended benefits.