Night of the stars: Dressel, Ledecky keep winning at trials 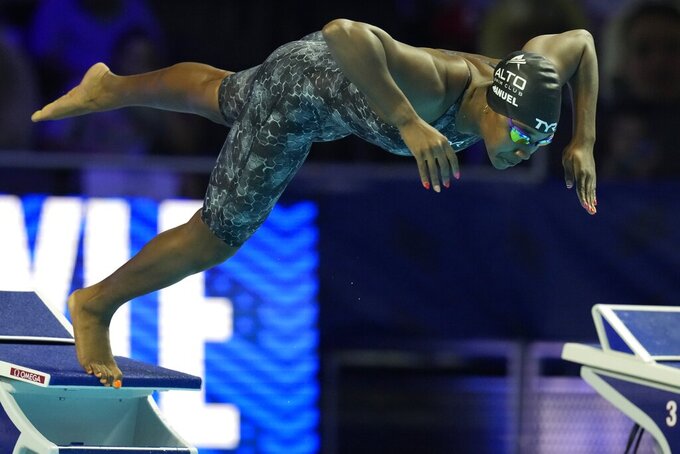 Their only complaint? Both wanted to go a bit faster Saturday.

Caeleb Dressel added another event to his Tokyo program, powering to a dominating victory in the 100-meter butterfly.

Katie Ledecky blew away the field in the 800 freestyle, winning by more than 5 seconds in a race where the battle for second provided the only drama.

Leading right from the start, Ledecky was essentially racing herself. She started out under world-record pace but tailed off when it quickly became clear no one could beat her.

“It's challenging,” she said of being so far ahead of the field. “Sometimes I feel like I’m going faster than I am."

Ledecky finished more than 10 seconds off her world-record performance at the Rio Olympics.

“It was a fine swim,” she said. “I thought I’d be a lot better than that given how good my prelim swim felt.”

Fifteen-year-old Katie Grimes outraced veteran Haley Anderson for the second spot at the Olympics, knocking more than 11 seconds off her personal best to touch second in 8:20.36.

Anderson, who already made the Olympic team in marathon swimming, just missed out on a race at the pool. She finished 15-hundredths of a second behind the youngster after a race covering 16 laps.

"Speechless," said Grimes, who races for a club in Nevada. “I wasn't expecting that. I just wanted to finish it. I'm so honored to be in this meet, to be going to Tokyo."

In an interesting twist, Grimes is the same age as Ledecky was when she won her first Olympic gold with a surprising victory in the 800 free at the 2012 London Olympics.

“To be able to be on the team with her,” Grimes said, “is gonna be awesome.”

As with Ledecky, no one was even close to Dressel as he finished the fly in 49.87 — just off his world record of 49.50 set two years ago at the world championships in Gwangju, South Korea.

No world records have been set through the first seven days of the U.S. trials. Dressel thought he had a shot in the fly.

“I would’ve liked to have been faster to put on a little bit of a show for the crowd,” he said.

“This meet has gone as according to plan as it could have,” he said.

Tom Shields claimed the second spot on the U.S. team by touching next in 51.19. Shields was an Olympian in 2016, taking gold as part of the 4x100 medley relay.

Dressel, who had already made the Olympic team with a victory in the 100 freestyle, made it 2-for-2 on the night when he returned a short time later to win his heat in the semifinals of the 50 free.

Dressel is hoping to swim three individuals events in Tokyo and perhaps all four relays, giving him a shot at joining Michael Phelps, Mark Spitz and Matt Biondi as the only swimmers to win seven swimming medals at the Olympics.

At the last world championships, Dressel became only the second swimmer after Phelps to win eight medals at a major international competition. The 24-year-old Floridian claimed six golds and two silvers, though two of those were in non-Olympic events.

He said there's room for improvement in the 100 fly.

With Phelps now retired, the burden is on Dressel and Ledecky to step up at these pandemic-delayed Olympics.

Grimes wasn't the night's only surprise. Regan Smith, who has already won the 100 back, faded to third in the 200 back to miss out on a second individual event in Tokyo.

Smith finished third in 2:06.79, more than 3 seconds off her personal best.

White and Bacon are both headed to the Olympics for the first time.

Simone Manuel, who revealed that she was diagnosed with overtraining syndrome after failing to advance from the semifinals of the 100 free, moved on to the final of the 50 free with the third-fastest time (24.50).

“I’m just trying to race as best as I possibly can with whatever my body has,” Manuel said. “I’m a person that fights to the end. I'll never know what the 50 is going to be if I don’t go out there and give it a try.”

Nathan Adrian is facing the same predicament in the men’s 50 free after failing to qualify in the 100.

Adrian must finish in the top two in Sunday final to make his fourth Olympic team.

The first Black woman to win an individual gold medal in swimming, Manuel won’t get a chance to defend her historic title in the 100. But revealing her health and mental struggles relieved some of the pressure she was feeling coming into the trials.

“I’ve gotten a lot of nice messages and responses from people,” Manuel said. “It makes me think that I’m not alone.”

She added, “I just want to see whatever I’ve got. I want to walk away with my head held high after this meet.”

Abbey Weitzeil was fastest in the women's 50 free, posting a personal best of 24.27 to take the top seed into the final. She already won the 100 free at these trials.

“I'm super excited. I haven’t done a best time since 2015,” the 24-year-old Californian said. “I was really shocked when I saw the screen, but I can’t let my guard down.”