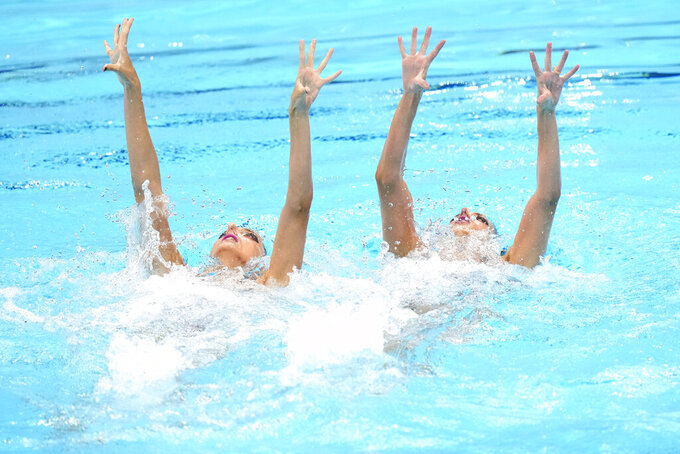 Romashina and Kolesnichenko received marks totaling 97.9000 points for a routine that was accompanied by the music “Spiders.”

They were followed by China’s Huang Xuechen and Sun Wenyan with 96.2333 and Ukraine’s Marta Fiedina and Anastasiya Savchuk at 94.9333.

The 31-year-old Romashina is going for her record sixth gold medal. She is tied for the most in the sport’s Olympic history with fellow Russians Anastasia Davydova and Natalia Ishchenko.

Romashina teamed with Ishchenko to win duet gold at the past two Olympics. Now, she’s seeking a three-peat with a new partner at the Tokyo Aquatics Centre.

The Russians have dominated the sport formerly known as synchronized swimming for more than two decades. Their last Olympic loss came at the 1996 Atlanta Games.

The 22 teams will compete again Tuesday in the technical routine preliminaries. The pairs with the top 12 combined scores advance to Wednesday’s final.

The American duo of Anita Alvarez and Lindi Schroeder was tied for 13th with 86.5333.

The host country is hoping for a major upset. Japan has won 14 Olympic medals — but never a gold — after claiming bronze medals in both the duet and team at Rio de Janeiro.

Japan’s Yukiko Inui and Megumu Yoshida were fourth with 93.9333.

Long known as synchronized swimming, the sport rebranded itself after the 2016 Rio Olympics. Most swimmers were opposed to the change, but world governing body FINA said the new name would better illustrate what the sport is about and hopefully lead to greater popularity.

Tiny Liechtenstein is competing at the Olympics for the first time after the pair of Lara Mechnig and Marluce Schierscher picked up one of the nine spots available at a qualification event in June.