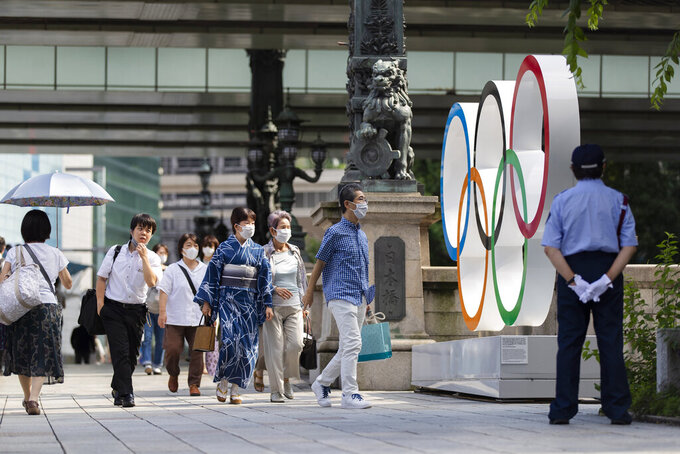 People walk by the Olympic rings installed by the Nippon Bashi bridge in Tokyo on Thursday, July 15, 2021. (AP Photo/Hiro Komae)

TOKYO (AP) — An Olympic athlete and a staffer linked to the Tokyo Games tested positive for COVID-19 after arriving in Japan, organizers said Thursday.

The two people, who were not identified, were among six new cases — including four contractors who are residents of Japan — reported by the Tokyo local organizing committee.

The athlete, who tested positive on Wednesday, went into 14-day quarantine. Eight days before the opening ceremony on July 23, it was unclear if the athlete must miss their event.

The staffer classed as “games-concerned personnel” — a category including the International Olympic Committee, sports governing bodies, Olympic teams, sponsors and official broadcasting staff — tested positive on Tuesday and is also in quarantine for two weeks.

The six cases lifted the total to 26 COVID-19 infections of games participants and workers in Tokyo since July 1, organizers said.

Tokyo authorities also reported on Thursday 1,308 new COVID-19 cases for the highest daily total since Jan. 21. It was the 26th straight day of cases being higher than one week previously.

The postponed Tokyo Olympics are being held in a state of emergency one year after they were originally scheduled.

The organizers’ tally of COVID-19 cases does not include athletes and team officials testing positive at camps outside Japan.

The refugee team pushed back its arrival from a pre-games camp in Qatar because an unidentified member of the delegation was infected in a case announced Wednesday. The IOC said the person was single-vaccinated, has no symptoms and was isolated by Qatari authorities.