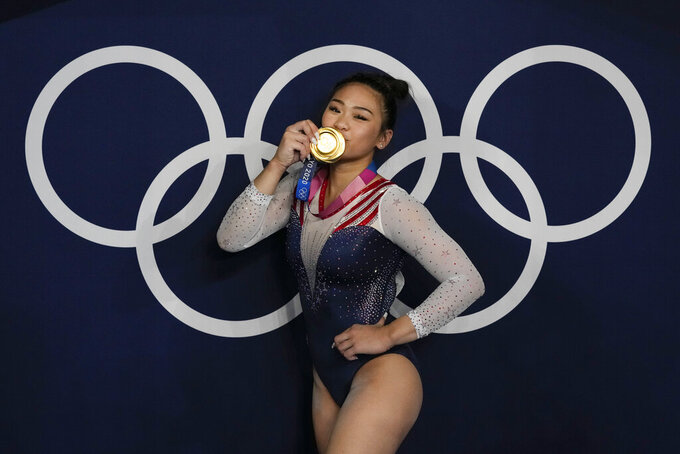 Sunisa Lee, of United States, reacts as she poses for a picture after winning the gold medal in the artistic gymnastics women's all-around final at the 2020 Summer Olympics, Thursday, July 29, 2021, in Tokyo, Japan. (AP Photo/Gregory Bull)

TOKYO (AP) — Sunisa Lee's life changed the second she placed a gold medal around her neck. The newly minted Olympic gymnastic champion's plans, however, have not.

At least for now.

A day after a thrilling victory in the women's all-around, Lee insisted she's ready to go to start her college career at Auburn. Really ready.

When incoming freshmen are expected to report to their dorm rooms on The Plains on Aug. 11, Lee plans to be there.

“(College) just has been another one of my dreams and goals after the Olympics,” the 18-year-old said Friday, less than 24 hours after edging Brazil's Rebeca Andrade for the top spot on the podium. "So I feel like if I were to go pro, it would have to be like something like really good.

Well, it might be. The Americans have produced each of the past five Olympic champions. The previous four — Carly Patterson, Nastia Liukin, Gabby Douglas and Simone Biles — were teenagers at the time of their triumphs. None of them competed collegiately, opting to turn professional in an effort to cash in on their newfound celebrity.

Back then, however, things were different. Gymnasts had to choose between accepting endorsements or college scholarships. Those days are over thanks to recently passed legislation that allows collegiate athletes to make money off their name, image and likeness.

There will likely be no shortage of possibilities for the charismatic Lee, the first Hmong American to win an Olympic medal. She's getting a bit of a crash course on the finer points of the rules surrounding NLI. Whatever comes along, however, she expects to compete for the Tigers next season.

“I do want to go to college and have fun and kind of get away from this elite atmosphere just because it’s so, like, crazy,” Lee said. “And I know that college is going to be way better.”

The transition should be easy. Lee's longtime coach Jess Graba and Auburn coach Jeff Graba are twin brothers. Jeff Graba doesn't see why Lee can't go to school while enjoying the trappings that come with being a multiple-medal winner in one of the Olympics marquee sports.

“There’s a pro league for gymnastics, it’s just endorsements," Jeff Graba said. “So it’s name image and likeness. Time permitting, she should be able to make just as much money as she would have normally made.”

Lee could become the first true litmus test for athletes in traditionally non-revenue college sports. She's in no hurry to find out. She's a favorite to add another medal to her gold in the all-around and team silver during the uneven bars final on Sunday.

Maybe by then, things will have settled down a little. They didn't in the hours after her steady, poised performance on floor exercise helped her soar to the top of the podium. Her phone practically melted from her notifications on social media from random well-wishers to actress Reese Witherspoon.

Not bad for someone whose slow recovery from a broken foot left her wanting to bail on trying to make it to Tokyo. She hung in there and now finds herself one of the new faces of her sport and the U.S. Olympic movement.

St. Paul, Minnesota, where Lee is from, declared Friday “Sunisa Lee Day," a symbol of just how quickly things can turn when you stand atop the podium at the Olympics with the national anthem playing and NBC's ever-present cameras zooming in.

Yes, she'll arrive at Auburn as not just another freshman. Yet she is looking forward to the chance to bring some balance to her life. The run-up to the Olympics is a grind at the elite level. NCAA rules will limit her practice time. She needs the rest.

“My body just needs time to heal itself,” she said.

She hasn't ruled out trying to do both collegiate and elite gymnastics at the same time. Maybe she'll try to make the world championship team in 2022 and 2023. The ones coming this fall are out of the question. There are classes to get to. A roommate to hang out with. A life to begin.

“It’s just a different environment,” Lee said. “I won’t be doing any gymnastics. So it’ll be really exciting for me when I can just, like, go out and do stuff.”