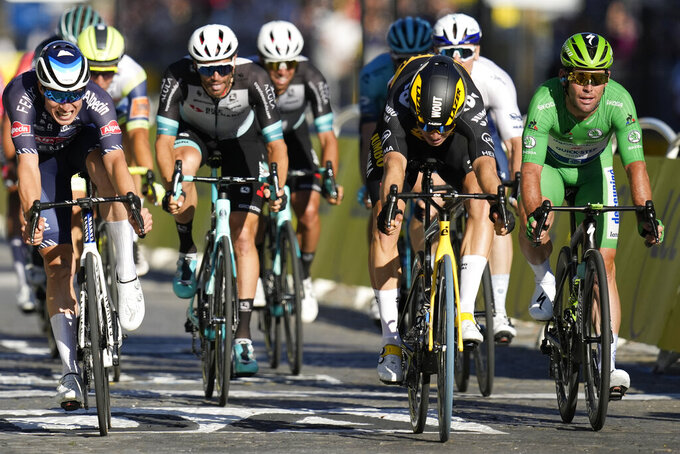 TOKYO (AP) — The men's and women's Olympic road races that begin the cycling program at the Tokyo Games this weekend are similar only in their start amid the forests of Musashinonomori Park and their finish line at Fuji International Speedway.

After identical stretches through the outskirts of Tokyo, their courses differ with the men tackling the iconic climb of Mount Fuji twice and the women avoiding it entirely. The men also have the punchy climb of Mikuni Pass that the women avoid, and will end up riding 145 miles to the 85 for the women while nearly doubling the amount of climbing.

Yet the biggest difference between the men's and women's races is this: More than a dozen men have a chance to capture the gold medal in Saturday's wide-open ride through the Tokyo countryside, while the women's race Sunday amounts to a showdown between the four-woman Dutch team and everyone else.

“Everybody in the world is trying to figure out how to beat the Dutch girls,” acknowledged Jim Miller, the high-performance director for USA Cycling, which will roll with Ruth Winder, Coryn Rivera, Amber Neben and Chloe Dygert on Saturday.

“It's the Dutch's race to win or lose and every other nation is going to race off how they control the race. I think we have a good team for that,” Miller added. “We have good tactics to at least have a crack at the Dutch women.”

So, who is on this so-called Dutch dream team?

It starts with Anna van der Breggen, the reigning Olympic gold medalist, fresh off a dominant victory in the Giro d'Italia Donne. Joining the world champ are Marianne Vos, who captured gold at the 2012 Games in London; La Course by Le Tour and Liege-Bastogne-Liege winner Demi Vollering; and Annemiek van Vleuten, who was leading the Rio Olympics road race before a crash on a downhill section left her with a concussion and three spinal fractures.

Together, the four riders from the Netherlands have won nine world championships, three Olympic medals and just about every marquee race for professional women — Amstel Gold, La Fleche Wallonne and many others.

“We have a very strong crop of cyclists at our disposal from which we could select three fully-fledged Olympic teams. That really is a luxury position,” Dutch national team coach Loes Gunnewijk said. “We're one of the favorites but we are used to that. And the riders can also do very well there. It’s still sport, there are no guarantees in advance. All the pieces of the puzzle have to come together that day. But we leave with one goal: that is gold and a third consecutive title.”

Before the women take to the course, though, the men will race for one of the first medals of the delayed Tokyo Games.

Among those at the start line Saturday will be Tadej Pogacar, just six days removed from his second consecutive victory in the Tour de France. He'll be racing alongside his Tour rival, Primoz Roglic, on the four-man Slovenian team.

Olympic courses typically suit one-day specialists rather than Grand Tour riders, but the huge amount of climbing coupled with a fast run-in to the finish means both Pogacar and Roglic could well factor into the finish at Fuji. So could Ecuador's Richard Carapaz, who was third at the Tour, and Top 10 finisher Guillaume Martin of France.

But they're just part of a handful — or several handfuls — of riders with an opportunity to claim Olympic gold.

Then there's the Dutch men, who are out to prove they're every bit as strong as their women counterparts. Bauke Mollema won a stage at the Tour and Wilco Kelderman finished a surprising fifth place in the overall standings.

“There are several guys who did their Tour to prepare for the Games. Maybe they still have an edge,” Evenepoel said. "But someone like Tadej recovers quickly from such a tough race. He also knows how to do it, so I don’t see why he wouldn’t be a joint top favorite. Then when you see how Wout flew in the past few weeks, you can say he’s in the shape of his life.

“He has always said he would work towards his goal and that his Tour would be to prepare for the Games,” Evenepeol added. "He’s done that well. He looks sharp and fresh. This Wout shouldn’t be afraid of this course.”

You can count former Tour winner Bradley Wiggins among those in the brilliant Belgian's camp, too.

“Wout is the best rider in the world at the moment,” he said said on his Eurosport podcast. “The guy is phenomenal. I have huge respect for him. He’s now the favorite for the road race. He has to be. And I’d love to see him win it.”