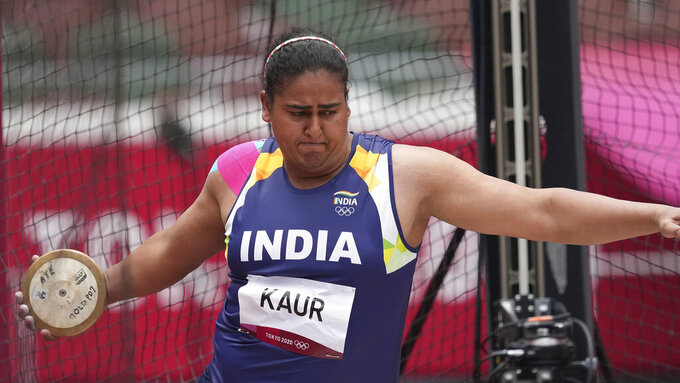 Kaur had one year cut from the standard four-year ban after she admitted the violation and accepted her sanction, the AIU said.

Kaur will be allowed to keep her sixth-place finish at the Tokyo Olympics last year but will miss the 2024 Paris Olympics before the ban expires in March 2025.

The 26-year-old Indian tested positive for stanozolol in a urine sample given in March when training at Patiala, India. The steroid was most famously used by sprinter Ben Johnson at the 1988 Seoul Olympics.

Kaur first suggested the positive test was caused by a contaminated protein supplement, according to the AIU’s published ruling on the case.

Traces of the steroid were confirmed in tests on the supplement by the laboratory in New Delhi accredited by the World Anti-Doping Agency. However, an AIU scientific advisor’s evaluation was that traces in the supplement were not compatible with the athlete's positive test.

Kaur set an Indian national record of 66.59 meters when competing in her home country several weeks before the Tokyo Olympics.

In Tokyo, she finished just over two meters out of the medals in a competition won by Valarie Allman of the United States.