Organizers apologize to Ukraine for calling them Russian 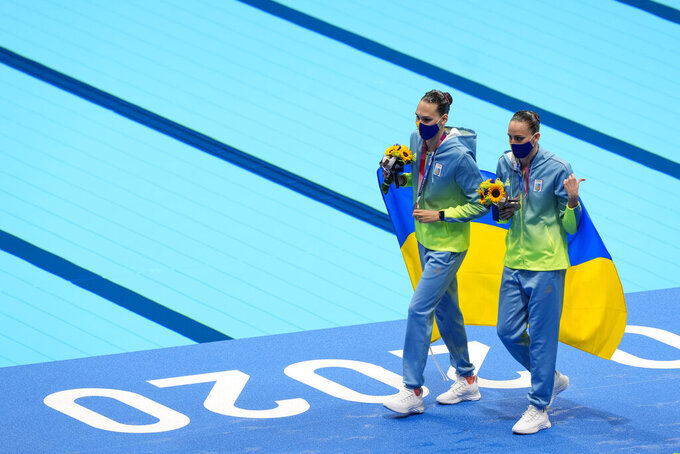 “It was purely an operational mistake,” organizing committee spokesman Masa Tanaka said of the error on Wednesday at the Olympic pool.

The mistake is sensitive because of years-long diplomatic tensions between Ukraine and Russia. The Ukrainian region of Crimea was annexed by Russia during the 2014 Sochi Winter Olympics.

Conflict between Ukrainian government forces and Russia-backed separatists continue in the eastern Donbas region near the shared border between the countries.

Russian athletes Svetlana Romashina and Svetlana Kolesnichenko won the artistic swimming duet competition on Wednesday. The Ukrainian duo of Marta Fiedina and Anastasiya Savchuk took bronze but were announced on the podium as representing ROC, the acronym for the Russian Olympic Committee.

“The French language calling out (of medalists) should have said Team Ukraine, however it said ROC instead,” Tanaka said later in Japanese.

Announcements at Olympic venues are typically done in Japanese, English and French, which is the home language of the modern Olympic movement.

“Of course, people noticed that and the person in charge of announcements apologized,” Tanaka said through a translator. “I also used this opportunity to express my apology to those who are in the Ukrainian team.”

More than seven years after the annexation, Crimea is still recognized as Ukrainian territory in international law.

At this year’s European Championship, an outline of Ukraine’s national border, including Crimea, was woven into the national soccer team’s jersey. Russian soccer officials complained to European soccer’s governing body, which allowed the map outline to stay while asking for a slogan to be removed from inside the collar of the jersey.

European soccer rules have prevented Ukrainian and Russian national and club teams from being drawn to play against each other for security reasons since 2014. Olympic athletes from the two countries routinely compete in the same events, however.

During the opening ceremony on July 23, a Russian TV network cut to commercials just before the Ukrainian athletes entered behind their national flag. The broadcast returned after the Ukrainian team had passed.