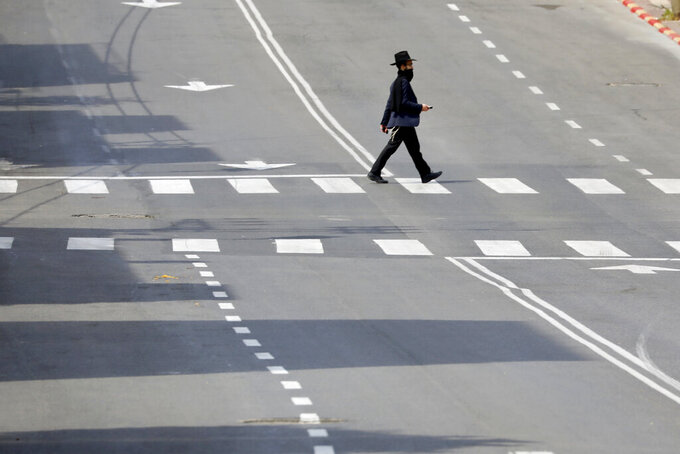 An Ultra orthodox man cross a main deserted street because of the government's measures to help stop the spread of the coronavirus in the orthodox city of Bnei Brak, a Tel Aviv suburb, Israel, Thursday, April 2, 2020. ‏On Wednesday, Netanyahu ordered a police cordon around the largely ultra-Orthodox city of Bnei Brak, east of Tel Aviv, to limit movement to and from the city. Bnei Brak has the second highest number of coronavirus cases in Israel. (AP Photo/Ariel Schalit)

The peak summer travel season is looking like a bust.

American Airlines said Thursday it will reduce its international schedule this summer by more than 60% and delay new routes because of plunging travel demand during the coronavirus outbreak.

Flights to Asia will be cut the most. Still, the pullback is less severe than the 80% to 90% cuts American is making to international service in April and May. The number of passengers screened at U.S. airports has dropped more than 90% compared with a year ago.

Meanwhile, British Airways reached a deal with unions that will mean no one is fired in the coming weeks and months. The agreement applies to more than 30,000 workers and will mean that the government pays 2,500 pounds ($3,100) of a worker’s monthly salary with British Airways paying the balance up to 80% of an employee’s pay.

BOEING BOOST: Boeing will get $882 million in payments that the Air Force withheld because of problems with the company’s aerial refueling tanker.

The Pentagon said Thursday it wants to keep cash flowing to defense companies that are suffering during the coronavirus outbreak. Boeing will make changes to the KC-46 including improving a computerized camera system used during refueling that had drawn complaints from the Air Force.

OFF THE RAILS: With auto plants shut down, rail shipments from the auto industry tumbled 70% last week to 5,423 carloads, according to the Association of American Railroads. Total container shipments slid 14% as trade with China plummets.

On Thursday, the U.S reported that the trade deficit tumbled in February to the lowest level since 2016 as exports fell, and imports fell more. The politically sensitive gap in the trade of goods with China narrowed when the world's No. 2 economy was locked down to combat the coronavirus outbreak.

Norfolk Southern, Union Pacific and CSX have warned of a material impact on earnings.