Pitino's summer job: Trying to get Greece into Tokyo Games 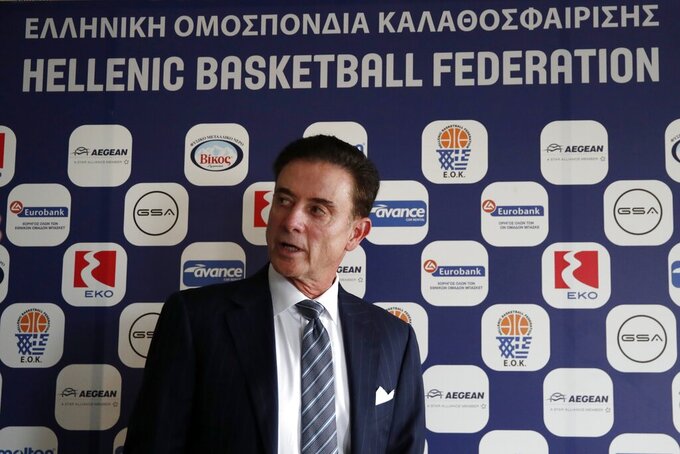 Luckily for the Hall of Famer, basketball is a universal language.

The Iona College coach — formerly of Providence, Louisville, Kentucky, the New York Knicks and the Boston Celtics, among other stops — is also the coach of the Greek men’s national team, which begins play Tuesday in one of the four remaining Olympic qualifying tournaments that will determine the last four spots in the men’s field for the Tokyo Games.

Greece hasn’t been to the Olympics in men’s basketball since 2008, and it is a bit of a long shot to get there this year — in part because the country’s best player, two-time NBA MVP Giannis Antetokounmpo, is otherwise engaged at the moment with the Milwaukee Bucks in the Eastern Conference finals, along with his brother Thanasis Antetokounmpo.

“It would be great for the players who play in Greece,” said Pitino, who has never been to an Olympics, not even as a fan. “It’s been a long time since they’ve gotten there. Having Giannis and Thanasis would certainly have been a big deal for us, but this is about these players more than it is about me.”

Greece plays Canada on Tuesday in the first game of the qualifier in Victoria, British Columbia, then faces China on Thursday. It’ll need to win at least one of those games to move into the semifinals; the other three teams competing there are Uruguay, Turkey and the Czech Republic.

When Pitino and the Greeks arrived in Canada, the first film he showed them was “Miracle” — the Disney version of the story of the 1980 U.S. Olympic hockey team that stunned the world in Lake Placid, New York, by beating the Soviet Union in the medal round and then winning a gold medal.

The reason Pitino chose that movie was simple.

“Great things can come when a team is united toward a common goal,” he said.

Pitino’s Italian is much better than his Greek, but truth be told, he’s likely picked up more than those three greeting phrases in the language. He spent parts of two seasons coaching the perennial Greek power Panathinaikos, leaving there last year when the pandemic struck and surprising many by being hired at Iona.

The experience in Greece translates nicely to what he’s trying to do now in the Olympic qualifiers.

“It’s FIBA basketball,” Pitino said. “It’s different offenses, different ways of playing things. I’ve said this almost 100 times now: I came to Greece at age 63, 64, to learn a different brand of basketball and to pick up things that at my age I wouldn’t have picked up if I didn’t come over here. It was a great experience and it helped me grow as a coach. When you’re in your mid-60s as a coach and you’re still growing, that’s what you want to have.”

The pandemic had a big impact on Pitino's first season at Iona. The Gaels didn’t play between Dec. 23 and Feb. 12, were only 6-5 late in the season, then won six consecutive games to capture the Metro Atlantic Athletic Conference title and a fifth consecutive NCAA tournament berth.

Spending a few weeks in Greece with the national team meant some very long days to take care of things at Iona.

“The toughest thing was 1 o’clock in the morning Zoom calls, where it was 5 o’clock back at Iona,” Pitino said. “You’re already exhausted from the day and then you have a Zoom call, so that’s been the most difficult thing.”

But if the Greeks — a team led now by former Florida standout Nick Calathes and NBA lottery pick Georgios Papagiannis, along with Kostas Antetokounmpo, the third brother in that family’s NBA trio — find a way to the Tokyo Games, those long days will seem more than just worthwhile.

“It’s been a great experience and a great opportunity,” Pitino said.