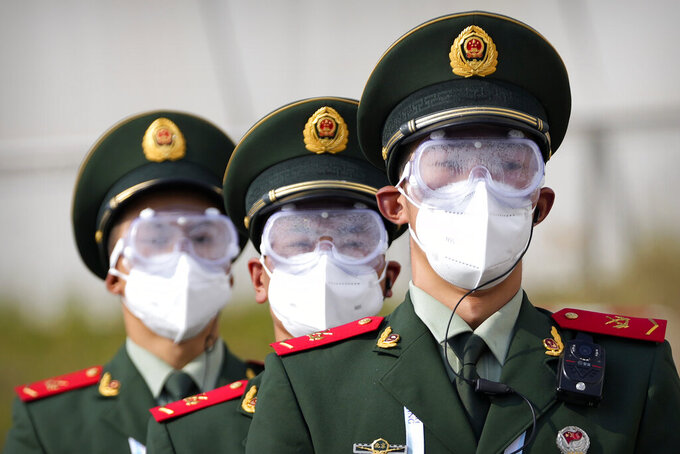 Chinese paramilitary police wearing goggles and face masks march in formation at the Yanqing National Sliding Center during an IBSF sanctioned race, a test event for the 2022 Winter Olympics, in Beijing, Monday, Oct. 25, 2021. A northwestern Chinese province heavily dependent on tourism closed all tourist sites Monday after finding new COVID-19 cases. The spread of the delta variant by travellers and tour groups is of particular concern ahead of the Winter Olympics in Beijing in February. Overseas spectators already are banned, and participants will have to stay in a bubble separating them from people outside. (AP Photo/Mark Schiefelbein)

Polish luge officials said a malfunction at the sliding track built for this winter's Beijing Olympics caused one of its top athletes to crash and sustain a serious injury on Monday.

Mateusz Sochowicz fractured a kneecap in the crash at the track in Yanqing, China, the Polish team said. He also had cuts and bruises, and it's not known if he can return this season.

Sochowicz was on a training run and crashed into a barrier that should have been open when a sled is in the track, according to a release from the Polish Toboggan Sports Association.

It is a safety requirement at all tracks that, before a sled is given the green light to start a run, personnel have ensured that the entire chute is cleared of obstructions. It was not known Monday what caused the barrier to be in Sochowicz's way.

“I am alive and I am well," Sochowicz, who finished 20th overall in last season's World Cup standings, wrote on Facebook. “Thank you all for your really great support."

Sochowicz said he would have more to say about the crash Tuesday. The International Luge Federation called it a “training accident” and was still planning to have training sessions continue on the Yanqing track Tuesday.

It's unlikely that, even if Sochowicz had seen the barrier, he would have had enough time to react and somehow avoid the crash.

Skeleton and bobsled athletes from around the world spent a couple weeks at the track last month, almost all of them seeing the facility for the first time. Luge athletes arrived in China last week for a couple weeks of training, and they will open their World Cup season there later this month.