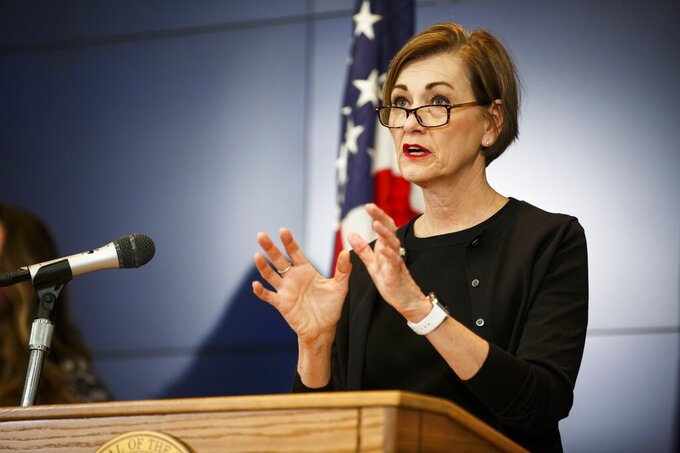 DES MOINES, Iowa (AP) — Pressure from medical experts and politicians mounted Thursday on Iowa Gov. Kim Reynolds to issue a statewide stay-at-home order, despite her repeated insistence that such a move isn't necessary.

Governors in most states have issued such an order, but Reynolds has argued that data shows the move isn't needed in Iowa even though she has imposed other restrictions to slow the spread of the coronavirus.

State public health officials reported Thursday that there were 66 new cases in Iowa of COVID-19, the diseased caused by the virus. That brought the state's total count to 614 and 11 deaths, including two new ones that happened in Linn County.

Iowa Workforce Development officials also announced Thursday that there were 58,453 claims for unemployment insurance filed last week, a galling figure that came a week after Iowans filed 42,000 claims. Before the virus hit Iowa, jobless claims typically were around 2,200 a week.

One of the most outspoken critics of Iowa’s approach to fighting the outbreak has been Eli Percenevich, an epidemiologist and physician who oversees a group of researchers studying infection prevention at the University of Iowa and Iowa City’s VA Hospital.

He has called on Reynolds to issue a shelter-in-place order, saying many Iowans aren't getting the message that they need to stay home.

“Many citizens are hearing that as if they don’t need to shelter at home and maybe only certain people do like older people,” he said. “The messaging really needs to improve. Until all of us take this seriously it’s going to be a longer process for us to come out of our current social distancing interventions.”

Percenevich said the metrics used by the Iowa Department of Public Health to recommend stricter or relaxed social distancing interventions are inadequate. The agency on Thursday released a document showing that its guidance has been based on the percentage of cases requiring hospitalization, the rate of cases over the last 14 days and number of outbreaks in long-term care centers.

“By the time you are waiting for specific disease metrics that are not targeting exponential spread, you are many weeks behind the virus," he said. “You are intervening too late.”

Reynolds addressed the criticism Thursday by saying her orders have been done incrementally based on what the data was telling her. She said Iowa’s actions have not been much different than those of states that have shelter-in-place orders.

“My challenge I guess to the individuals out there that think I haven’t done enough, I would ask them to go and take a look at other states and recommendations that they’ve put in their stay at home — I don’t care what you call it — I’m basing it on data,” she said.

Reynolds extended her earlier school and business shutdown orders through April 30 and Republican legislative leaders quickly followed her lead saying lawmakers now will not return until after that date.

“We have additional things that were looking at that we may need to ramp up if the numbers and the data drive us to do that,” she said.

Democratic legislative leaders joined the call for Reynolds to issue a statewide stay-at-home order. In a letter released Thursday, state Sen. Janet Petersen and state Rep. Todd Prichard said such an order would send a clearer message about the serious nature of the pandemic.

Democratic Iowa Congresswomen Abby Finkenauer and Cindy Axne said they also have sent Reynolds letters calling on her to issue such an order.