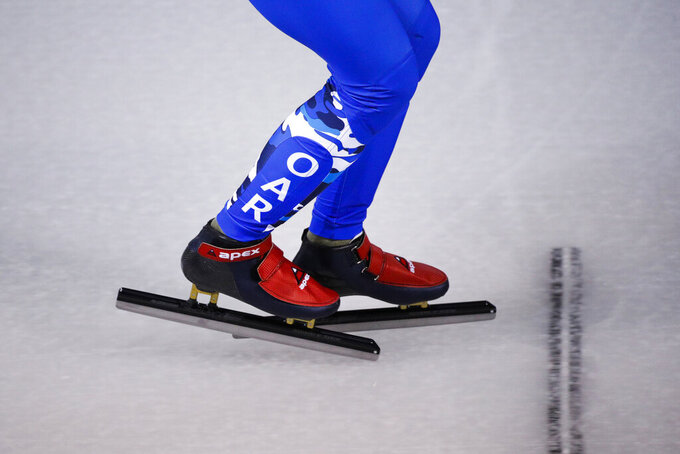 FILE - A Russian short track speed skater Pavel Sitnikova wears an Olympic uniform with the logo OAR - Olympic Athlete from Russia, during a training session prior to the 2018 Winter Olympics in Gangneung, South Korea on Feb. 3, 2018. Doping and other controversies involving Russian athletes have played a significant role at the Games for over a decade. (AP Photo/Jae C. Hong, File)

BEIJING (AP) — The doping case of 15-year-old Russian figure skater Kamila Valieva has dominated the conversation at the Winter Olympics in Beijing. Doping and other controversies involving Russian athletes have played a significant role at recent Olympics. Here's a timeline of how disputes involving the country have affected the Olympics over the last decade and a half:

At the last Olympics in the Chinese capital, Russia ended up third in the medals table behind China and the United States, but that success was later revealed to have been built on performance-enhancing drugs.

When the Winter Olympics in Russia six years later were found to have been tainted by doping, the International Olympic Committee rechecked samples from Beijing using more modern steroid-detecting technology. Nineteen Russian athletes were eventually disqualified, including 14 who won medals.

The Beijing Olympics ran parallel to a war between Russia and Georgia. Shooting medalists from each country, Natalia Paderina and Nino Salukvadze, staged a gesture for peace when they embraced on the podium.

In 2007, Russia had been awarded hosting rights for the 2014 Olympics. The next Winter Games in Vancouver were meant showcase Russia's competitiveness.

They were a disaster.

Even before the London Olympics began, Russia was working to undermine them.

Rodchenkov was invited to tour the doping lab facilities outside London and took careful notes of the equipment they were using. Steroid use was even higher than in Beijing four years before, with nearly 50 doping cases on the Russian team, an all-time record for an Olympics.

Track and field and weightlifting were among the worst affected sports.

This was the big one for Russia, which topped the medal table at home and spent tens of billions of dollars transforming a slice of the subtropical Black Sea coast.

Rodchenkov testified that he spent the Olympics passing steroid-tainted samples through a hole in the wall of the Sochi laboratory with the help of an officer of the security services, switching them for clean urine collected months earlier.

The athletes, he said, had been using a cocktail known as “Duchess” of different steroids dissolved in whisky for the men, and vermouth for the women. After he fled to the United States in November 2015, he detailed years of doping and cover-ups over dozens of sports.

Among those eventually banned was two-time bobsled champion Alexander Zubkov, who carried the Russian flag at the opening ceremony.

As Russian athletes flew out to Brazil, their country was under sanctions from the United States and European Union because of the conflict in Ukraine, which had begun just after the Sochi Olympics.

It was also at odds with the World Anti-Doping Agency, which demanded a blanket ban on the Russian team after Rodchenkov went public with his allegations in May 2016. The International Olympic Committee refused to go that far — prompting criticism it had sold out to Russia — but it allowed individual sports to impose their own vetting and restrictions.

Russia was only allowed one competitor in track and field, where an athlete's hidden-camera footage had exposed teammates chatting about their steroid use.

Russia was banned entirely from the Paralympics the same year.

Russia was officially barred from the Olympics for the first time after the IOC finally completed its own long-running investigation into doping in Sochi. In its place came the Olympic Athletes from Russia team without the Russian flag or anthem.

That didn't stop the men's hockey team from bellowing out the Russian anthem at their gold-medal ceremony, one of only two events Russians won.

A failed legal challenge to overturn the IOC's system of vetting athletes dominated the build-up to the Olympics, and there was another legal battle when curler Alexander Krushelnitsky failed a doping test. He lost a bronze medal and was banned four years.

The new acronym, short for Russian Olympic Committee, came amid new restrictions after WADA found data from the Moscow lab had been tampered with to stop it from clearing up old doping cases.

The vetting system from 2018 was swept away by a Court of Arbitration for Sport ruling which also halved Russia's four-year punishment, so there was a near-full-strength team in Tokyo when the Olympics were finally held in 2021 following a one-year delay caused by the coronavirus pandemic.

The ROC won 71 medals and there was one doping ban for triathlete Igor Polyansky.

Competing again as ROC, everything seemed to be going smoothly for the Russian team until 15-year-old figure skater Kamila Valieva was revealed to have tested positive for the banned heart medication trimetazidine in a sample from before the Olympics.

She was allowed to keep skating, partly because her young age made her a “protected person” in sports law, but she fell twice in the free skate and missed the podium by finishing in fourth place.