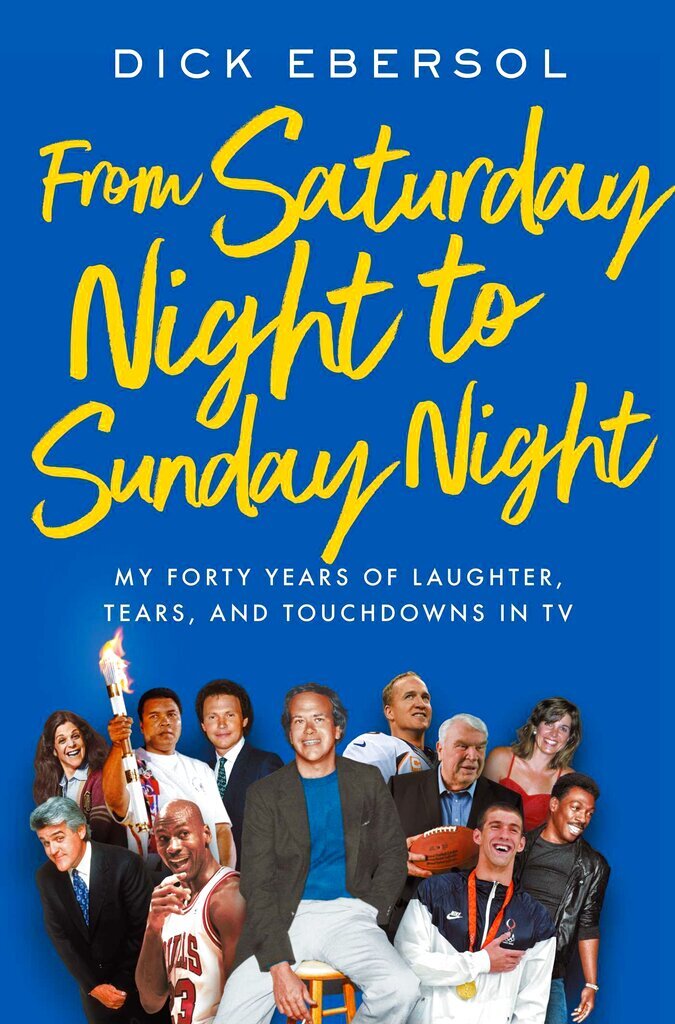 This cover image released by Simon & Schuster shows "From Saturday Night to Sunday Night: My Forty Years of Laughter, Tears, and Touchdowns in TV" by Dick Ebersol. (Simon & Schuster via AP)

“From Saturday Night to Sunday Night: My Forty Years of Laughter, Tears and Touchdowns in TV,” by Dick Ebersol (Simon & Schuster)

Anyone who’s followed the TV industry since broadcasts went color will know the name Dick Ebersol. And while those insiders and diehards are the most likely audience of this memoir, it’s a fun read for anyone who’s curious about the stories behind some of the biggest shows on television in the last half a century. Turns out Duncan Dickie Ebersol, born 1947 in Torrington, Connecticut, had a hand in a lot of them.

Ebersol’s career started as the first-ever Olympics researcher for ABC Sports, traveling the world to gather stories about the athletes who would compete at the 1968 Winter Games in Grenoble, France. He hadn’t even turned 20 when legendary producer Roone Arledge hired him. It seems rather quaint now, but there was a time when fans watching the Olympics couldn’t Google the name of an athlete and read his/her bio in seconds. It was Ebersol’s job to find those stories, then make sure the on-air talent and production teams at ABC featured them to attract and retain viewers. It’s a template Ebersol carried over from ABC to NBC Sports when he took over the top Olympics job there in 1989, helping make NBC the “Olympics Network” — a lucrative contract it still holds today.

Before he became The Man at NBC Sports, Ebersol played a key role launching another iconic TV institution, “Saturday Night Live.” Producer Lorne Michaels is now more synonymous with the groundbreaking sketch comedy show, but it was Ebersol who hired him and made sure NBC executives and sponsors gave him the space he needed to make TV history. “SNL” fans will enjoy a few behind-the-scenes stories, including Ebersol’s solution to keeping NBC executives away from meteoric (and often inebriated) talents like Jim Belushi — he made sure “SNL”’s offices (including the now famous Studio 8H) were situated on the eighth and ninth floors, accessible via a different bank of elevators at 30 Rockefeller Plaza than the executive offices on the sixth.

There isn’t a lot in these pages not already reported, but Ebersol does treat readers honestly. His dislike for Fred Silverman, who ran NBC from 1978-1981, and in Ebersol’s opinion often pushed shows on air that weren’t yet ready for primetime, is apparent. He even recalls the failed experiment of the XFL with pride, recalling how GE CEO Jeffrey Immelt cited it as an example of the importance of taking risk, even when they don’t pay off.

Ebersol bookends the memoir by recounting his personal tragedy, the death of his son Teddy at the age of 14 in 2004. Teddy and his brother, Charlie, were with their dad in a plane that crashed shortly after takeoff on a snowy day in Colorado. It was a private plane, afforded by Ebersol’s powerful job, and he’s lived every day since with a sadness most of us, thankfully, will never know. “I learned to be even more grateful for all the wonderful things our family had in our life, and how to be thankful for the 14 years we’d had with Teddy, even if we wanted, and he deserved, so much more,” he writes.

There is much more in these pages worth reliving — from the Michael Jordan years that spanned the run of NBC’s contract with the NBA, to the personal role Ebersol played making sure Michael Phelps’ gold medal bonanza at the Beijing Olympics aired live in the U.S. in 2008, to the landmark deal with the NFL that resulted in the best game of the week more often than not televised on Sunday Night Football. Ebersol was the unseen hand behind them all and gives readers added insight into how the moments that made them laugh, cry and cheer at their televisions came to be.