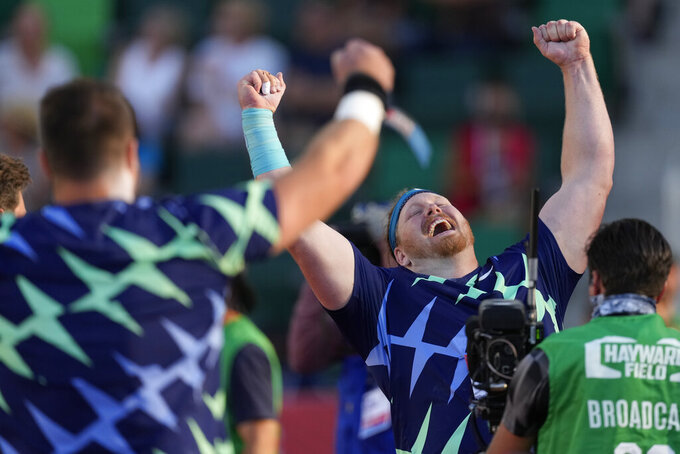 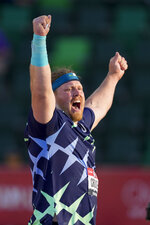 When Ryan Crouser broke it, “it felt like it was a huge weight lifted.”

The 28-year-old who built a training ring at his home in Arkansas to stay on point during the coronavirus pandemic shattered a shot put world record Friday night that was set 2 1/2 years before he was born.

On Day 1 of U.S. Olympic Trials, he heaved the massive medal sphere 76 feet, 8 1/4 inches (23.37 meters) to put his name in the record book and punch his ticket for Tokyo, where he'll have a chance to defend his Olympic title next month.

“There were so many times that I was throwing a six-pound shot out behind the middle school, throwing by myself, and let it go and put my hands over my head and be like, ‘Oh, new world record!’” Crouser said. “I knew it’s been a possibility or potential to do it since 2017."

Virtually everyone in this tightly knit group of throwers knew the record of 75-10 1/4 (23.12) held by Randy Barnes since May 20, 1990, was in jeopardy. Earlier this year, Crouser topped Barnes’ indoor record. Earlier on Friday, during qualifying, Crouser heaved 75-2 1/2 (22.92) to set the American Olympic trials record.

Crouser was feeling so good in the preliminary round that he thought a world record was possible right then and there. What kept him from going for it was his shoes. Though he had brought a pair of new Nikes to Eugene for the trials, he opted for a more broken-in pair because the shot put ring at newly remodeled Hayward Field was “fast.”

“But they take your shoes if you break the world record,” Crouser said of World Athletics, which tests all shoes involved in a record. “I thought, ‘I don’t know, if I throw a world record in prelims, I won't have shoes for the final. I'll have to throw in the (new) Nikes.'”

So, the record held — but only for a few more hours.

Even before the fourth of his six tries on a mild, sunshiny evening had plunked into the dirt, Crouser was lifting his arms to celebrate. When the shot landed, far beyond where any other mark had been made, a collective gasp came from the quarter-filled stands.

About a half-minute passed while officials checked the distance. When the mark came up on the board, confirming that he had broken one of the longest-standing records in the books, he was mobbed by his competitors near the ring.

“Finally timed that one up,” said Crouser, who grew up in Oregon, went to college at Texas and now serves as a volunteer coach at Arkansas.. “I think I was celebrating on that one almost before it left my hand.”

Among those congratulating him were world champion Joe Kovacs, who finished second, and Payton Otterdahl, who earned the third spot.

“There are three or four guys capable of doing that,” Kovacs said. “In Tokyo, there are going to be some fireworks. Every year, we’re talking about the records being broken and I think there’s more to come.”

Several minutes after his record, Crouser was proudly posing on the field. The picture: Him standing next to the scoreboard with both thumbs raised and the words “World Record” highlighted in green on the board next to his new record.

Shot putters fashion themselves as part-time physics gurus. They spend hours analyzing their throws from multiple angles, all in the hopes of eking out a few more centimeters.

About the dynamics of his best-ever throw, Crouser said: “I stayed big with my chest and relaxed and let the entry happen. I didn't force it. And once I did that well, I knew the throw was going to be good, so I didn’t do anything to mess it up from there.”

Crouser, who finished second to Kovacs at world championships in Doha in 2019, didn't miss a day of training in 2020, even with the coronavirus pandemic shutting things down across the globe. He built a homemade shot-put ring that he constructed out of two sheets of plywood and screws from Home Depot.

The opening day of trials also featured strong first-round performances from world 800-meter champion Donavan Brazier and sprinter Sha’Carri Richardson, who chose orange as the hair color of the day and turned in the fastest 100-meter time (10.84 seconds). High jumper Vashti Cunningham — the daughter of former NFL quarterback Randall Cunningham — easily qualified for the final and discus thrower Valarie Allman set a meet record with her throw of 229- 8 (70.01) in qualifying.

In the night's other final, Woody Kincaid sprinted the final stretch to hold off Grant Fisher and win the 10,000 meters. Both run for the Bowerman Track Club. Kincaid finished in 27:53.62. Joe Klecker was third.

All received second billing to Crouser.

He's hard to miss at a track meet. The 320-pounder takes down about 5,000 calories a day to keep weight on his 6-7 frame. His diet consists of two big breakfast burritos in the morning, a pound of ground beef for lunch and three of the four portions from a meal delivery service at night.

So, what does a newly minted world-record holder do for dinner? Well, options figured to be limited at the late hour he would get out of the track.