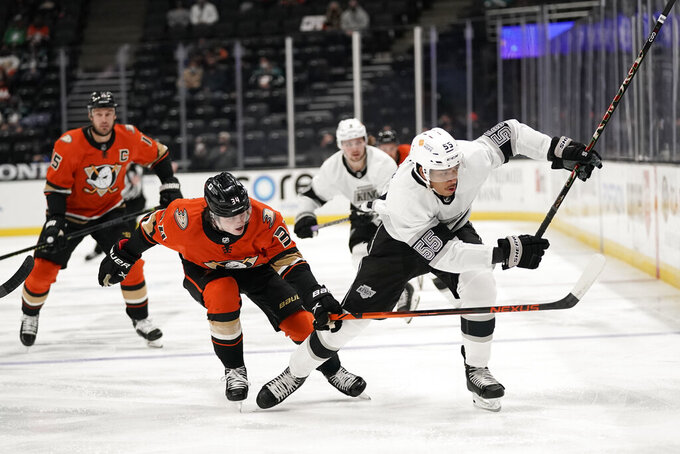 Trevor Zegras scored his second NHL goal, while Danton Heinen and Jacob Larsson had a goal and two assists apiece as the Ducks won the fourth Freeway Faceoff in six days, dominating the rivals' final meeting in an ugly Southern California hockey season.

The last-place Ducks used their home finale to pay tribute to the 40-year-old Miller, who recently announced he will retire after the season as the winningest American-born goalie in NHL history. Miller's teammates all wore versions of his No. 30 jersey during pregame warmups, and Honda Center played video clips of Miller's decorated career during the first period, culminating in a standing ovation from the crowd and both teams.

“It definitely was a different experience than I’m used to,” said Miller, who only lost his shutout bid in the third period. “I’ve always been kind of an intense player, so I tried to tell myself to take everything in. ... It was nice. I hadn’t played in a bit, and I was able to make a couple of saves and get everything going. It made me pretty happy to see the boys excited and things going their way."

Both teams lined up to shake Miller's hand after the game, and the Ducks gathered with Miller's wife and son at mid-ice for a photo amid several more standing ovations.

“I was just trying to keep it together,” said Miller, who is expected to play at least once on Anaheim's season-ending, four-game road trip.

Max Jones, Nicolas Deslauriers and Max Comtois also had goals for the Ducks as the NHL’s lowest-scoring team matched its highest-scoring performance of the season to end its nine-game home winless streak. Anaheim hadn’t won at Honda Center in regulation since Jan. 24, going 3-17-3.

“I’m not sure we could have drawn it up much better,” Anaheim coach Dallas Eakins said. “This has been a tough, adverse season rolling through a rebuild, and at least in our last home game, to send Millsy off like that, to get a win and to have a lot of spark in the game with a little glimpse of our future was an exciting thing.”

“It’s a good feeling,” said Bjornföt, a 20-year-old Swedish rookie playing in his 29th career game. “It took a while, but it’s nice to get the first one done. Tough night for us, but I’ll have the memories for the rest of my life.”

Both of Anaheim’s six-goal games this season came against the Kings and Petersen, who also gave up six on March 8.

“Let’s face it, we’re not going to make the playoffs,” Los Angeles coach Todd McLennan said. “I might as well say it right now, and we have to get over the fact that that’s happened. I think it’s noble that we’re feeling sorry for ourselves a little bit, but we can’t keep playing like we did tonight.”

Brendan Lemieux got his first goal for the Kings with 16:09 to play when Sean Walker’s errant shot bounced off his body. The goal ruined Miller’s bid for his 45th career shutout — more than any U.S.-born goalie except Jonathan Quick, who watched this game from LA’s bench.

Miller is the only player in hockey history to be named the top goalie in the NCAA, the AHL, the Olympics and the NHL. He won the Vezina Trophy in 2010 with Buffalo, and he was the outstanding player of the 2010 Winter Olympic tournament in Vancouver while leading the U.S. to silver medals.

Although the Ducks' offense had an outstanding game and pulled into a tie with Detroit for the NHL's fewest goals (115), Anaheim's power play is close to the worst in NHL history with just a few games to play.

Kings: At Coyotes on Monday.

Ducks: At Blues on Monday.