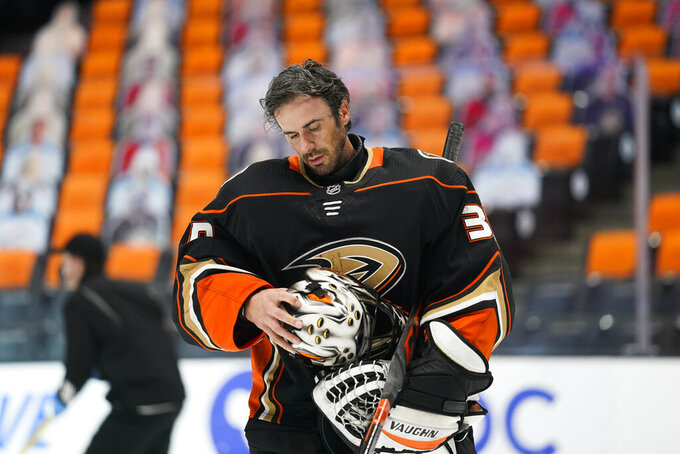 FILE - Anaheim Ducks goaltender Ryan Miller takes off his mask during the first period of an NHL hockey game against the Arizona Coyotes in Anaheim, Calif., in this Saturday, March 20, 2021, file photo. Ducks goalie Ryan Miller will retire at the conclusion of the season, ending the 18-year career of the winningest American-born goaltender in NHL history. The 40-year-old Miller announced his decision Thursday, April 29, 2021. (AP Photo/Jae C. Hong, File)

ANAHEIM, Calif. (AP) — Ryan Miller smiled and choked up a bit when he considered how his career as the winningest American-born goalie in professional hockey history almost never happened.

When Miller first became fascinated with goaltending as a youngster growing up in Michigan, he says his father, Dean, gently tried to discourage him from putting on the pads and the mask.

“He knew how difficult it could be to stand there,” Miller said Thursday. “But I felt like it was the spot for me.”

Three decades later, Miller has decided to enjoy the fruits of a lifetime spent meticulously preparing for his next game and his opponents' next shot.

The Anaheim Ducks goalie will retire at the conclusion of the season, ending his 18-year NHL career and a decorated tenure in international hockey as one of the greatest Americans to play the position.

“A skinny kid from the middle of Michigan was able to work at something and represent the country a couple of times and make a career out of hockey," Miller said during an emotional farewell news conference attended virtually by his family and many hockey friends.

“My situation goes to show with some dedication, you can set your sights and you can accomplish something. If (young players) have looked to me as inspiring, that makes me feel good. If they could take a moment where I was on the ice and use it to build something for themselves, that makes me feel really good.”

Miller has played 794 games for Buffalo, Vancouver, St. Louis and Anaheim, where he has spent the past four seasons primarily as John Gibson's backup. Miller won the Vezina Trophy in 2010 as the NHL's best goaltender with the Sabres.

Miller passed John Vanbiesbrouck's career wins record for an American-born goalie in February 2019 with Anaheim. With a career 390-289-87 record and a .914 save percentage, Miller ranks second among Americans behind Los Angeles' Jonathan Quick with 44 shutouts, and second behind Vanbiesbrouck in games played.

Miller also had an accomplished international career highlighted by his play at the 2010 Winter Olympics in Vancouver, where he was named the most valuable player and best goaltender. He went 5-1 with a .946 save percentage while leading the U.S. team to a silver medal, but Canada won gold with Sidney Crosby's famed overtime goal.

The Michigan State product and Hobey Baker Award winner also has been named the top goaltender in the NCAA and in the AHL, making him the only goalie in hockey history to pair those two honors with his Vezina Trophy and his Olympic laurels.

It's an impressive list of accomplishments for a goalie who could have played forward like his brother, former Ducks forward Drew Miller, and three cousins — Kip, Kelly and Kevin Miller — who also made the NHL.

But the cerebral, obsessive kid simply couldn't resist the lure of the crease. Miller says he loved the often-thankless position from the start.

“I was very concerned about our end of the game on defense, and I thought I could make a difference back there,” Miller recalled. “I think some people have a knack for things, and they might get close to all that aligning for them, but they don’t get to that point, I consider myself lucky. I found something I loved to do, and my personality aligned with the position, and I was able to carve it out.”

Miller's NHL teams made seven playoff appearances, where he posted three shutouts and a 2.52 goals-against average over 57 games. His greatest team success occurred early in his 12 years with Buffalo when he backstopped the Sabres to the Eastern Conference finals in 2006 and 2007.

“Buffalo is always going to have a big part of my heart,” Miller said. “I feel like I really grew up there.”

The current Ducks will miss the playoffs for the third consecutive season, so Miller's career will end May 8. Anaheim's final two home games are this weekend.

Miller is retiring, but he isn't moving: He's staying in the Los Angeles area with his wife, actor Noureen DeWulf, and son Bodhi. Miller already lived close to the beach during the NHL offseason before he joined the Ducks, and his wife's successful Hollywood career made it easy to stay.

Being tied to Southern California limits Miller's immediate job prospects in hockey, but he said he is looking forward to the chance to “chill out a little bit.” After that, he hopes to find a role in player development and ultimately team management.

There's one job he won't be taking any time soon as he starts to enjoy life without pads, however.

“I do feel like I have a bit of coaching inside of me, but I can’t step out of an NHL schedule and into a worse schedule right now,” Miller said with a laugh. “Those guys are here way more than the players, they travel as much, and they’re on the hook for all the scouting and the preparations. I’m not touching that for a while.”