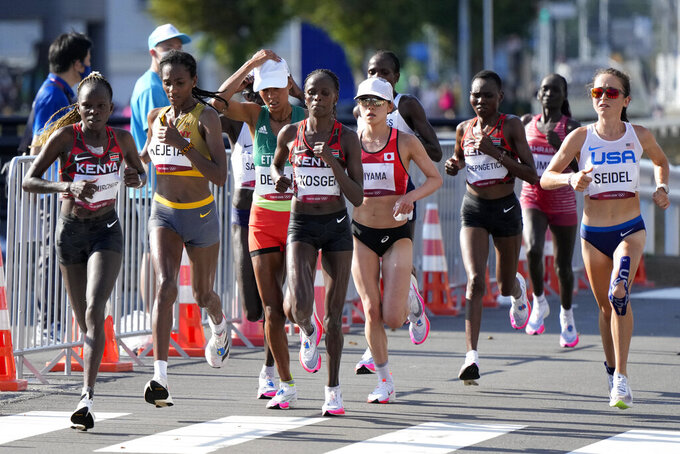 Peres Jepchirchir, left, of Kenya, leads the pack on her way to winning the women's marathon at the 2020 Summer Olympics, Saturday, Aug. 7, 2021, in Sapporo, Japan. Her compatriot Brigid Kosgei, centre placed in the second while Molly Seidel, right, of the United States finished in the third. (AP Photo/Shuji Kajiyama)

Even if a medal was something she did set as a goal all the way back in fourth grade.

For a class project, Seidel scribbled in black ink on the back of a decorated card: "I wish I will make it into the Olympics and win a gold medal.”

Recalling that moment, she laughed and said: “I was little bit off but still got the medal. I'm pumped for the bronze.”

Seidel finished behind Kenyan marathoners Peres Jepchirchir and Brigid Kosgei on a sweltering Saturday run through the streets of Sapporo at the Tokyo Games.

This was only her third marathon — ever.

“I was a little bit star-struck,” said Seidel, who finished second at the U.S. Olympic marathon trials in February 2019 to earn a spot for Tokyo. “Being able to run with them, a lot of it is just staying calm, and not trying to think, ‘Oh my gosh, you’re running with the fastest women in the world.’ It’s just trying to be like, ‘OK, focus on your race, focus and what you need to do, and stay in it.’”

So that's what she did.

She hung with the lead pack. Then, world champion Ruth Chepngetich dropped out on a hot day that led the race to be moved up an hour (Seidel found out night the night before at dinner and went straight to bed). It was down to four at one point with about four kilometers remaining when Lonah Salpeter suddenly stopped and walked to the side of the road (she would finish).

Seidel finished strong — spurred on by a rare cheering crowd that lined the course — to secure that medal.

To think, she was envisioning a top-10 finish, maybe top-five if things went right. She wasn't selling herself short, just looking at times. Her best was 2:25:13, and there were numerous runners with sub-2:20.

“I wanted to go and just be that person that when you’re racing and all these women were probably like, ‘Who the hell is this girl?’” she said. "Just trying to, like, stick my nose where it didn’t belong and just kind of get after it. I mean, Olympics only happens once every four years, you might as well take your shot.”

Right after the race, NBC helped facilitate a call to her relatives, who were watching in Wisconsin.

“I was just kind of overcome and started crying a little bit,” said Seidel, who went to Notre Dame for college. "This is the day you dream of your entire life. This is what it means to be an athlete."

She said she drew inspiration from teammates competing in Tokyo. Like her friend Courtney Frerichs, who earned silver in the 3,000-meter steeplechase.

“Seeing your peers do incredible things kind of gives you the courage to go after it,” Seidel said. “I figured if I hung out with them long enough and just was brave, something good would come of it.”

In an recent essay for Team USA's website, Seidel opened up about dealing with obsessive-compulsive disorder and her history with eating disorders. She said she’s appreciative that mental health in sports is a topic that’s being discussed.

“I guess my biggest message is that even someone who's dealing with mental health struggles, it doesn't mean you can't compete at the highest levels,” Seidel said after the race. “The biggest thing is being able to get help and have a great support network around you — and you can do incredible things.”