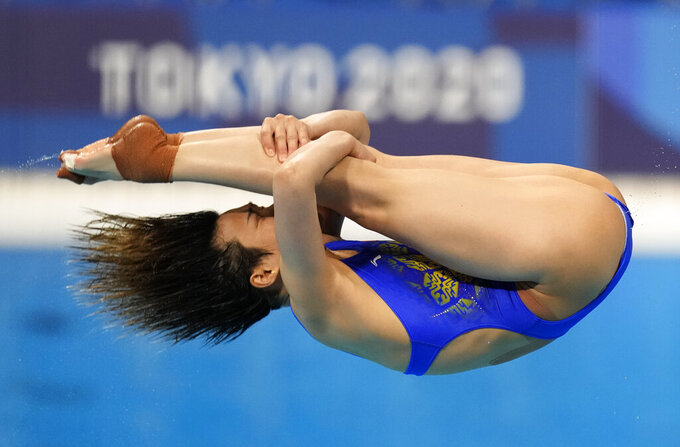 TOKYO (AP) — China had another dominating performance at the Olympic diving pool, taking the top two spots in the semifinals of the women’s 3-meter springboard on Saturday.

In a repeat of the preliminaries, defending Olympic champion Shi Tingmao posted the highest score over five dives and teammate Wang Han ranked second. The pair already teamed up to win the 3-meter synchronized event.

Shi led the way with 371.45 points. Wang (346.85) and Canada's Jennifer Abel (341.40) were the only ones even close to the leader, stamping China as a huge favorite in Sunday's final to earn its fourth diving gold in five events at these games.

The top 12 moved on to the final, a group that included Americans Krysta Palmer and Hailey Hernandez. Palmer was fifth and Hernandez 10th.

But Canada's Pamela Ware made a stunning mistake after finishing fourth in the prelims and ninth going into her final dive of the semifinals — good enough to advance.

She botched the takeoff and simply plopped into the pool feet first, a failed dive that resulted in no points. She finished last in the 18-woman field.