Shiffrin's fall in Olympic giant slalom will stick with her 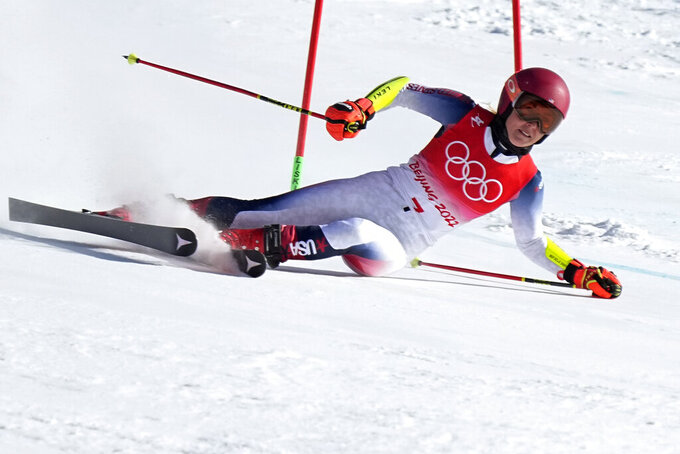 Mikaela Shiffrin of United States loses control and skis off course during the first run of the women's giant slalom at the 2022 Winter Olympics, Monday, Feb. 7, 2022, in the Yanqing district of Beijing. (AP Photo/Robert F. Bukaty)

BEIJING (AP) — Mikaela Shiffrin will not soon forget what happened Monday in her first race of the Beijing Olympics. The poor transition that came five turns, and about 10 seconds, into the defense of her 2018 gold medal in the giant slalom. The skidding slide onto her left side. The missed gate that meant she was done so early in the opening run of a two-leg event.

The first “DNF” — “Did Not Finish” — next to her name on any GS result sheet in more than four years, a streak encompassing 30 races.

It’s not simply about how rare these mistakes are. It’s about the sting that sticks with her.

“I won’t ever get over this,” Shiffrin said, her voice steady, after slowly making her way to the bottom of a course known as The Ice River at the Yanqing Alpine Skiing Center. “I’ve never gotten over any.”

That’s what happens when an athlete is as successful as Shiffrin, a 26-year-old American who owns three Winter Games medals — including a pair of golds — along with three World Cup overall titles and six world championship victories.

The misses stand out.

She spoke about “how much it hurt” and how “heartbreaking” it was when she failed to complete a giant slalom on Jan. 23, 2018, in the Kronplatz World Cup stop at San Vigilio di Marebbe, Italy — the last time she didn't complete a GS, which came three weeks before she won the gold at the Pyeongchang Games. She mentioned, too, a slalom error before those same Olympics. And a flub six years ago in another race.

“That’s what drives me to try to keep working and improving, so I can try to make it (so) those things don’t happen. But sometimes they still do happen and, unfortunately, it happened today,” said Shiffrin, who plans to be out there again Wednesday in the slalom, a race she won at age 18 at the 2014 Sochi Games. “I felt like there was a lot to look forward to, but, well, now we need to reset.”

The giant slalom was the first women’s Alpine race on the schedule in Beijing — Shiffrin intends to enter all five — and she was hardly the only racer to encounter trouble. The second run went on without her; in all, 19 of the 80 first-run starters failed to finish.

Sara Hector of Sweden — who leads the GS standings this season — continued her recent run of success with the biggest win of her career later Monday, taking the gold with a two-run time of 1 minute, 55.69 seconds.

Federica Brignone of Italy added a silver medal to the bronze she claimed behind Shiffrin four years ago. Lara Gut-Behrami of Switzerland was third for her second Olympic bronze.

Marta Bassino of Italy, who won the World Cup giant slalom title last season and went two spots earlier than Shiffrin on Monday, fell on her left hip, slid down and spun around.

Shiffrin, who is from Colorado, was the seventh racer out of the start gate, lost control coming around a left-turn and later blamed “trying to push it,” describing her skiing as “almost anxious.”

She tried to right herself but could not.

Eventually, she propped herself up, stopped on the side of slope, stuck her poles in the snow and put her hands on her hips.

“It’s hard to know,” she said later, “how it would have gone the rest of the run. ... It’s like, ‘Well, yeah, the day was finished, basically, before it even started.’”

Shiffrin is as precise a skier as there is, someone who prides herself on making sure she gets all the way down the course, pushing just the right amount to be faster than everyone else while staying upright — no easy task while sending yourself down the icy side of a mountain.

“That's the brutality of the sport: You can be as prepared as you want to and you still ski out in the fourth gate or the seventh gate or the 10th gate,” said Norwegian rival Ragnhild Mowinckel, who was fifth Monday after getting the GS silver in 2018. “Anyhow, I think (Shiffrin) will rise up again and she will probably nail the slalom and the other disciplines.”

After her tumble, Shiffrin spoke to her boyfriend, Norwegian skier Aleksander Aamodt Kilde, who finished fifth Monday in the men’s downhill won by Beat Feuz of Switzerland.

Shiffrin speaks honestly and openly about the pressure created by the weight of expectations — her own, of course, and those of fans, but also coaches, friends and family. She is upfront about the burden of dealing with the accidental death of her father, Jeff, two years ago.

Not long after Shiffrin’s competitive day was done far sooner than expected, she got a hug from her mother, Eileen, who serves as one of her coaches, then headed back out to do some training for the slalom.

Shiffrin still should have a handful of chances over the next two weeks to become the first Alpine ski racer from the United States to win three Olympic golds across a career.

“I’m not going to cry about this,” she said Monday, “because that’s just wasting energy.”