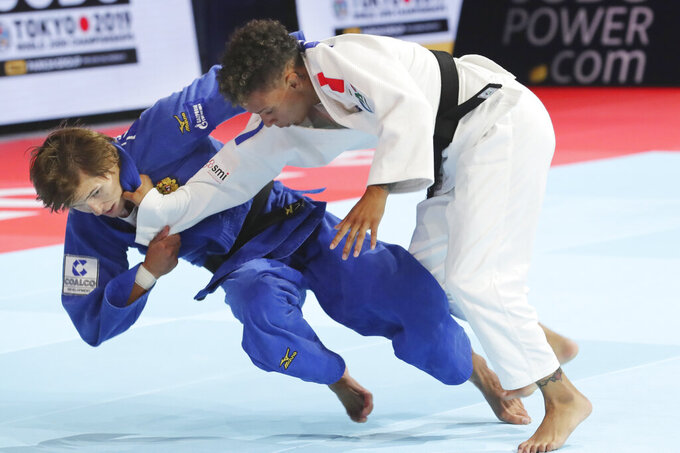 FILE - In this Aug.26, 2019 file photo, Natalia Kuziutina of Russia, left, competes against Amandine Buchard of France during a women's -52 kilogram semi-final of the World Judo Championships in Tokyo, Monday. Six French athletes have spoken about being gay and shared difficult experiences they had during their formative years, among them Amandine Buchard. (AP Photo/Koji Sasahara, File)

PARIS (AP) — Six French athletes have spoken about being gay and shared difficult experiences they had during their formative years.

A documentary by Canal Plus called “Faut qu’on parle” (We have to talk) interviewed three women and three men.

The documentary aired on Saturday, during Pride Month, and two days before Las Vegas Raiders defensive end Carl Nassib became the first active NFL player to come out as gay.

The 38-year-old Dumerc, who starred for France when it finished 2012 Olympic basketball runner-up, explained how she felt in her early years.

“You’re not sure what’s happening, you become attracted to someone who’s the same sex as you,” she said. “Then you start getting on really well and things start going a bit further. There are intimate moments.”

But Dumerc was distressed by some people’s perceptions.

One relationship was painful because her partner did not want to say she was gay.

“I wasn’t ashamed, but the person I was with was,” Guyart said. “That’s not a great way to build your identity and to envisage a loving relationship. It was destructive, in that sense.”

Guyart and Dumerc said they invented boyfriends’ names, including precise details such as birthdays, to hide they had girlfriends.

Buchard became European judo champion this year and said she needs to talk.

Things were very painful growing up.

“I got close to a girl, and we would see each other from time to time. For me it felt really strange, because at the time I was going out with a boy,” Buchard said. “I was very scared, I cried a lot and shut myself away. For years I grew up (in an environment) where it was really badly thought of to be with a girl.”

Clamy-Edroux is a professional rugby player with second-tier Rouen. He said his upbringing “as a West Indian and a Catholic” made him scared to tell anyone how he felt.

“It was inconceivable (to be gay), it had to be a boy with a girl,” he said. “You want to please your loved ones, your parents. But you’re not being yourself.”

Stravius experienced glory as the 2011 world champion in backstroke. A year later he won Olympic gold for France in a relay.

His focus has turned to helping others who may be reluctant to say they’re gay.

“To open doors, for me and for others,” he said.

The 32-year-old Stravius has some harrowing memories of his school days.

“I tried by all means to show everyone I was a hetero(sexual)."

That meant reproaching himself for his feelings.

“I thought, ‘Why has this fallen on me?’ When girls walked past I didn’t really look at them, but when boys did, yes,” he recalled. “I told myself ‘You’re not a homo(sexual). Just concentrate on girls and things will change, you’ll see.’ I forced myself to go out with a girl. ... But after three or four days I couldn’t do it anymore.”

The 23-year-old Aymoz is a four-time French figure skating champion.

“I know I’m doing something that’s good in helping to free up speech,” he said.