Sjöström off to Tokyo with metal plate, 6 screws in her arm 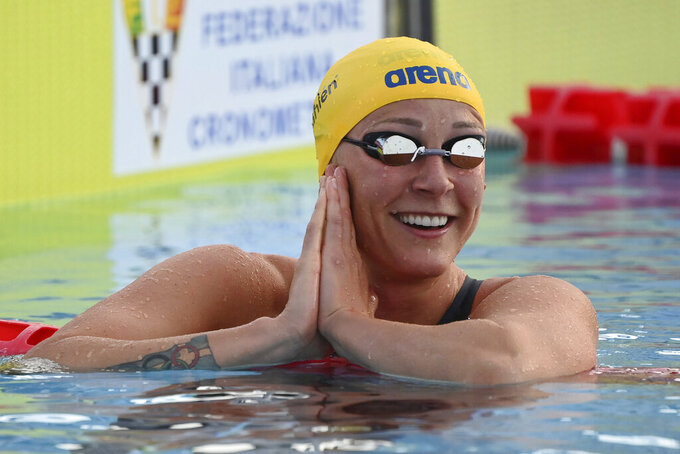 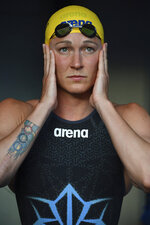 That’s what Swedish swimming standout Sarah Sjöström says about the broken right elbow that put her status for the Tokyo Olympics at risk.

“But because of COVID I’ve been staying a lot in Sweden (and) then the risk of slipping on ice gets much higher. So I slipped and I fell on my elbow and I broke the bone,” she said. “It went completely off.”

Two days after the accident in early February, Sjöström had a metal plate and six screws inserted to hold her arm together. Sixteen stitches completed the repair.

While the stitches were removed in March, Sjöström still has a massive scar stretching from above her elbow down into the colorful tattoo of the Olympic rings and Swedish flag on her forearm.

“So I’m almost like a robot now,” she said over the weekend at the Seven Hills meet in Rome, her final competition before traveling to Tokyo.

“It was a long way back. When I took my first strokes after the surgery I was like, ‘I can’t do this anymore. I can’t see myself swimming butterfly again.’ It was just impossible. ... I did a lot of single-arm swimming in the beginning, just to do something.”

For the defending Olympic champion in the 100-meter butterfly and a swimmer who has won seven of her eight world titles in fly, it’s easy to see why Sjöström was concerned.

Fortunately for Sjöström, she’s also one of the world’s best swimmers in the freestyle sprints. She holds world records in the 50 and 100 in both free and fly.

Her dilemma these days isn’t whether she can compete in Tokyo but rather which events she should enter.

Freestyle is easier on her surgically repaired elbow than the windmill-type stroke required for butterfly. That's why she raced exclusively freestyle when she returned to competition in early June.

Sjöström entered her first fly events over the weekend in the same pool where she set her first world record in the 100 fly at age 15 at the 2009 world championships in Rome.

“Now it feels fine. I’m surprised. I didn’t even think about it during the race,” Sjöström said after winning the 50 fly — which is not an Olympic event — on Friday.

“I’m definitely not convinced to swim the 100 fly after that race,” Sjöström said. “I felt absolutely exhausted.”

Less than 90 minutes after her 100 fly performance, Sjöström was back in the water for the 100 free in a race that had so many elite swimmers it could have doubled as a European final.

Sjöström clocked 53.47 to finish second in between Dutch veterans Femke Heemskerk and Ranomi Kromowidjojo — with Italy’s Federica Pellegrini in fourth.

“The 100 freestyle felt so much easier,” Sjöström said. “But I think maybe that’s because I’ve been working on my freestyle a little bit more than my fly. So maybe my butterfly needs more time before I can feel strong in the second 50.”

Sjöström will now take some time to discuss her Olympic program with her coach.

But whatever she swims, Sjöström can look back at how far she's come since that slip on the ice five months ago.

“My main focus has always been to really enjoy when I have progress in my rehab,” she said. “So every time I make a small, little step in my rehab I celebrate. So it made me stronger as an athlete mentally.

“Now that my injury is getting better, I really, really appreciate all the progress I do. Before, I almost took that a little bit for granted, whenever I had progress in training. But now I’m like, ‘Yes.’ I’m so happy all the time.”