Skateboarding and the Olympics: New friends, put to the test 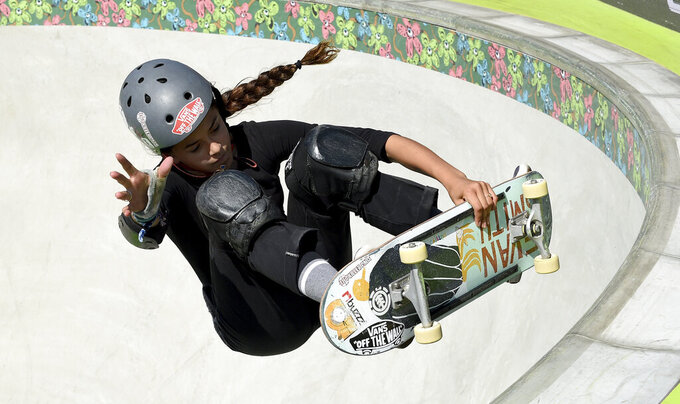 FILE - In this Thursday, June 13, 2019, file photo, Madeleine Larcheron, of France, competes in the women's park semifinals during the skateboard Dew Tour, in Long Beach, Calif. Skateboarding is one of four debut sports at the Tokyo Games, along with karate, surfing and sport climbing. (Keith Birmingham/The Orange County Register via AP, File)

CHELLES, France (AP) — For skateboarding, a sport where the No. 1 rule is that there are no rules, the straight jacket of the Olympic Games, with its dense thickets of tradition and regulation, may not be a natural or immediate fit.

So at the Tokyo Games, freewheelin' skaters and Olympic officials are going to learn a lot about each other. Could be quite a ride. Both have plenty to gain from making a splash with their brand-new partnership. Skating is one of four debut Olympic sports, along with karate, surfing and sport climbing.

The spectacle of skaters turning their boards into flying machines, soaring over obstacles, will deliver a rejuvenating injection of youthful energy to the dowdy sporting extravaganza. The youngest, Japan’s Kokona Hiraki and Britain’s Sky Brown, are just 12.

With its street fashions and “all-are-welcome” inclusive culture of all genders, ages and abilities having four-wheeled fun together, skating officials anticipate that the sport will help snag future generations of Olympic fans and viewers that the International Olympic Committee needs to keep making mega-bucks from the Games.

For skaters, the powerful Olympic spotlight means global visibility and, with that, possibly better prospects of earning a living from riding and sponsorships. Skaters also hope the Olympic seal of approval will generate more funding for skate parks and bowls to train, land and invent their tricks.

Some skaters fret that Olympic codification will come at a cost for the freedom, spontaneity and soul of their sport born on the streets. They argue that skating is a whole lifestyle, and worry it will be crimped and compromised by being co-opted. There were similar misgivings within snowboarding — before it went on to become one of the most riotous and popular shows at the Winter Olympics, and three gold medals turned Shaun White into a household name.

With high-adrenaline acrobatics akin to those seen on Olympic snow — so much so that White toyed with the idea of trying to also qualify in skating for Tokyo — skateboarding promises to wow and hook both existing and untapped Olympic audiences.

“The people who watch us in Tokyo are going to say to themselves, ‘This is pretty,'” predicts Madeleine Larcheron, a 15-year-old who'll compete for France.

“I'm often asked, ‘What’s the scariest trick?' There isn't one. In skating, everything is scary," she said. "You go upside down, you speed along, there is always a slice of danger.”

For its Olympic debut, skateboarding has a custom-built park on the shores of Tokyo Bay to play with.

The 40 men and 40 women will be chasing medals in two events — park, where they skate in a bowl, and street, where they navigate stairs, rails, curbs and other urban furniture.

The street competitions are in the first week, on July 25 and 26. The park events round out week two, on Aug. 4 and 5.

Because skateboarding is so fluid and inventive, with hundreds of tricks, variants and possibilities to choose from, judging is less codified and more subjective than other sports. Judges will scrutinize the difficulty and execution of tricks and runs, how skaters use and navigate obstacles, and will be looking to reward originality and variety.

As happened to White with his gold medals in the half-pipe at the Turin (2006), Vancouver (2010) and Pyeongchang (2018) winter games, the Tokyo Olympics could be a first step toward global fame for a skateboarder.

With no-fear stunts and polished messaging that age is irrelevant, Brown is already a very visible 12-year-old, with a rich portfolio of sponsors and array of social media accounts. The British phenom is back from a terrifying fall last year - video of which was posted — of course — on an Instagram account managed by her parents. She'll compete in the park event.

At the other end of the unusually broad age spectrum at the inaugural Olympic skateboarding competition will be Dallas Oberholtzer. The 46-year-old hails from South Africa, where he works on efforts to introduce young South Africans to the sport.