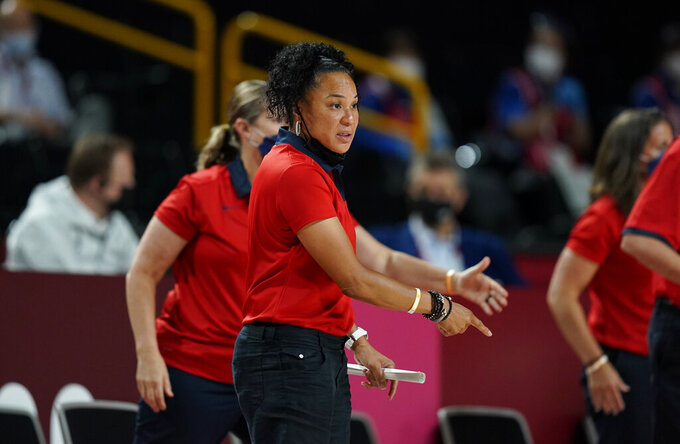 COLUMBIA, S.C. (AP) — Dawn Staley might not be done with Olympic coaching after all.

Staley led the U.S. women to a basketball gold medal at the Tokyo Games earlier this month, then flatly said she would not return for another run at the Olympics in Paris in 2024.

However, on Tuesday, Staley appeared to soften her position. She compared it with asking a woman who's just given birth if she wants another child and she would probably say no.

“Then you see how much that baby gives you joy, and you start thinking about it,” Staley said. “I'm probably about nine, 10 days removed from (the Olympics), I'm feeling a little bit differently now.”

Staley was the first Black head coach for the women's Olympic team.

In Tokyo, Staley suggested USA Basketball bring in her Olympic assistant, Minnesota Lynx coach Cheryl Reeve, as the next leader.

“I'm going to leave it as. If Cheryl's the one, she's the one,” Staley said. “If they choose to go in a different direction and come back here, I've never turned USA Basketball down.”

Staley has helped the United States to six Olympic gold medals — three as a player, two as an assistant, and this latest as head coach.