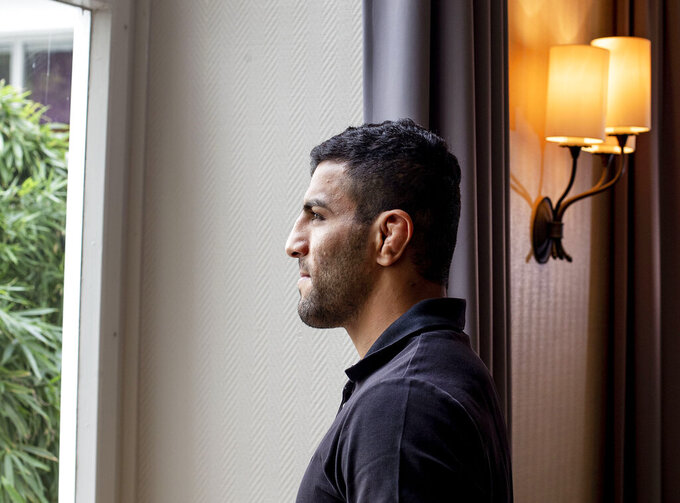 FILE - In this photo taken Sept. 12, 2019 file photo, Iranian judoka Saeid Mollaei poses for a portrait photo at an undisclosed southern city of Germany. Iran’s suspension from international judo events for refusing to let its athletes fight Israeli opponents has been overturned by the Court of Arbitration for Sport, it was reported on Monday, March 1, 2021. The case was provoked by former world champion Saeid Mollaei leaving the Iranian team in 2019. He claimed he was ordered by team officials to lose matches and withdraw from competitions to avoid facing Israelis. (AP Photo/Michael Probst, FIle)

LAUSANNE, Switzerland (AP) — Iran’s suspension from international judo events for refusing to let its athletes fight Israeli opponents was overturned by the Court of Arbitration for Sport on Monday.

The case was prompted by former world champion Saeid Mollaei leaving the Iranian team in 2019, claiming he was ordered to lose matches and withdraw from competitions to avoid facing Israelis.

CAS said its judges hearing the Iranian judo federation's appeal decided the International Judo Federation overstepped its own authority with such a severe ban, which was imposed in October 2019. The case was sent back to an IJF disciplinary panel for review.

The court acknowledged the Iranian judo federation had “committed severe violations of the IJF rules” on discrimination and should be punished, though within the world governing body’s rules.

The IJF had accused Iranian government officials of putting pressure on athletes including Mollaei, who later fled to Germany.

The IOC said the change did not need permission from Iranian Olympic officials because the judoka was technically a refugee.

During the case, the IJF said any action taken against Iran would not apply directly to the Tokyo Olympics, because athletes are technically entered by the Iranian Olympic Committee and not the national judo body.