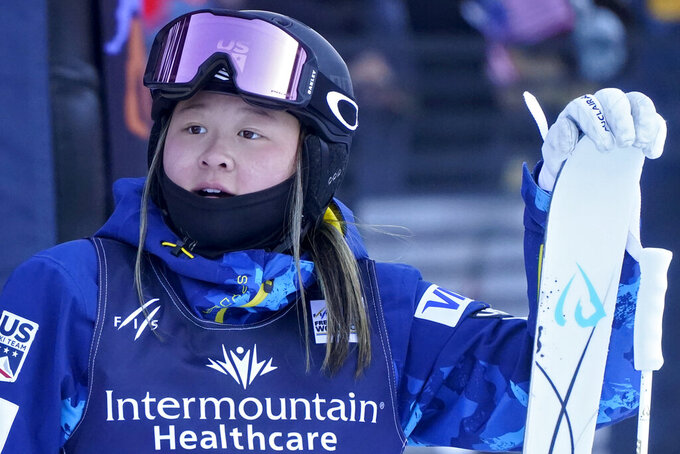 ASPEN, Colo. (AP) — American moguls skier Kai Owens has made her first Olympic team, giving the 17-year-old a chance to return to the country where she was born to compete for a gold medal.

Owens was abandoned at a town square in a province of China as an infant. Taken to an orphanage, she was adopted at around 16 months old by a couple from Colorado. She blossomed into a moguls standout.

“It becomes full circle when I step off that plane in China," Owens told The Associated Press on Friday after the U.S. freestyle skiing team was announced for the Beijing Games that begin next month. “When my skis touch the snow in China, it's going to be a really special moment for me because I get to ski in the Olympic Games in my birth country. It’s crazy how life works."

Owens, who lives in Vail, Colorado, recently looked back on a journal she's been keeping over the past four years. In the front, a goal — Beijing 2022.

“Every time I think about it, it just feels crazy,” said Owens, whose name, Kai, translates into “victorious."

“I’ve taken the mentality that making the team was a dream and everything that happened beyond was a bonus,” Wise said in a statement. “I’m excited to take the run I’ve been working on for the past four years to China and see how it stacks up against the world’s best.”

On the women’s side, Brita Sigourney, the bronze medalist in the halfpipe in ’18, and Devin Logan, a silver medalist in slopestyle from ’14, made the squad.

Nick Goepper also was named to the team. He captured silver in slopestyle at the 2018 Pyeongchang and bronze four years earlier in Sochi as part of a U.S. medals sweep.

The U.S. aerials roster includes Ashley Caldwell, who made her fourth Olympic team.