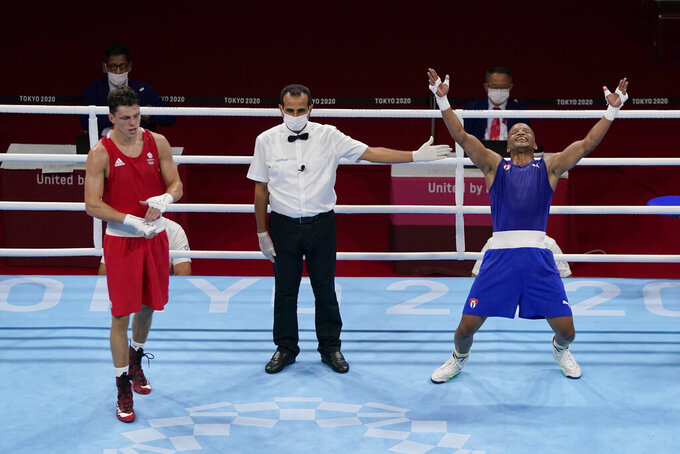 TOKYO (AP) — Roniel Iglesias simply appeared to be fighting on a higher level than his opponents.

Right through to his one-sided gold medal victory over British star Pat McCormack, Iglesias moved and punched his way through Tokyo with a grace to which everyone else in his division could only aspire.

A stellar Olympic performance by a classical Cuban boxer ended in the usual way Tuesday night in Tokyo: With a gold medal around the neck of a fighter from the nation that has practically perfected amateur boxing.

Iglesias claimed his second Olympic gold and his third overall medal in Tokyo, adding it to his bronze from Beijing in 2008 and his championship from London in 2012, both at light welterweight. He lost in the welterweight quarterfinals in Rio de Janeiro in 2016 and subsequently went through significant injury problems, but Iglesias said his focus never wavered.

“I have such great feelings and emotions after winning the gold medal in London first, but then having lots of difficulties,” Iglesias said through a translator. “Boxing is a very tough sport, but I was able to overcome those difficulties and I was able to clinch this title, which is so important to me. I think that my discipline, my tenacity in training helped me get here.”

Eleven days before his 33rd birthday, this fighter with superb technique and tenacity became the seventh boxer in Olympic history to win gold in two weight classes.

Iglesias even joined Félix Savón, Teófilo Stevenson and Lázaro Álvarez — who won his third bronze earlier in the evening — as the only three-time boxing medalists in Cuba's decorated history.

After spending half his life as a top fighter in Cuba's difficult system, and after enduring significant doubts from fans back home after he fizzled short of a medal in Rio, Iglesias was in the mood to state his case as one of Cuba's best.

“This puts me straight up there in the highest ranking, in the highest order,” he said. “I think this speaks for itself and shows how much I love the sport. ... Those who always doubted that I could achieve the Olympic pinnacle, that was an extra push from me to get up every morning and give it that extra bit of effort and achieve this result.”

One thing about the Cuban team has changed during the past two Olympics: Its boxers are now allowed to speak at length with Western reporters, and they’ve been invariably charming and thoughtful.

Fears of defection or corruption prompted the Cuban team to keep tight control of its Olympics boxers for decades, but the current coaching staff is more interested in making sure the world knows about its fighters' talents.

Iglesias' polish and style evoked memories of his country's rich history, and Iglesias clearly cherishes his place in those annals. He certainly doesn't seem like a candidate to head to the U.S. for a pro career. He confirmed he intends to fight on for Cuba, aiming for a shot at a third gold medal in Paris three years from now.

“I will try to see how my body reacts while I prepare, and then I’m looking toward Paris,” Iglesias said. “I will always try to achieve the goals I set out for myself.”