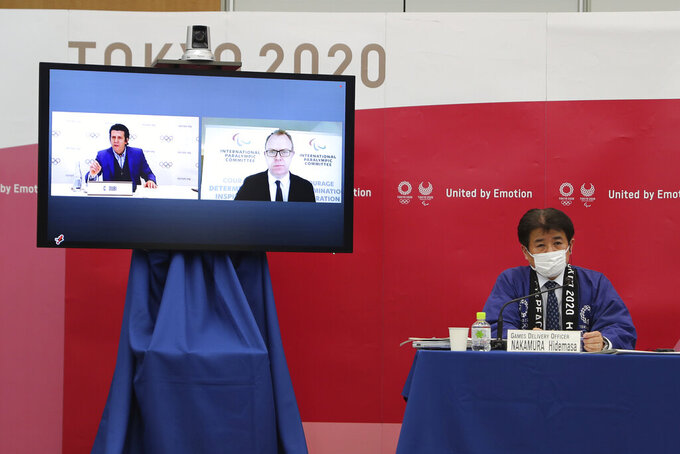 Hidemasa Nakamura, right, games delivery officer for the Tokyo Organizing Committee of the Olympic and Paralympic Games (Tokyo 2020), joins other representatives from the International Olympic Committee (IOC) and the International Paralympic Committee (IPC) at a Joint press briefing in Tokyo on Wednesday, Feb. 3, 2021. Tokyo 2020, IOC and IPC announced Wednesday they jointly developed and published the first version of "The Playbooks," which contains advice from international and Japanese health experts for COVID-19 countermeasures as well as the guidelines and rules that each games stakeholder will need to observe in order to play their part in ensuing a safe and secure games. (Du Xiaoyi/Pool Photo via AP)

TOKYO (AP) — It will be an Olympics like no other, the world’s largest mega-sports event being staged in the middle of a pandemic.

Tokyo organizers and the IOC on Wednesday began explaining in public just how they hope to do it, rolling out “Playbooks" to detail the ways that 15,400 athletes will enter Japan — and exit Japan — with the Olympics opening on July 23 and the Paralympics a month later.

“There are indeed a lot of questions in the public domain about how the games will take place this summer. And today is a preliminary review of how things will be done," Olympic Games executive director Christophe Dubi said in a video news conference with Tokyo officials.

The rollout of the Playbooks is aimed at assuring athletes, and an attempt to convince the Japanese public that the Olympics should go ahead. Polls across Japan show up to 80% want the Olympics postponed or canceled. The public sees the health risk in a country that has controlled the virus better than most.

The Playbook introduced on Wednesday is aimed at international sports federations and technical officials. Guides for athletes, broadcasters and the media will come in the next few days. They are all similar, and these are all the “first versions." Much of the information is still vague with more details coming in updates in April and June.

The IOC held a similar session earlier in the week with Olympic athletes and their representatives to explain the stringent guidelines in their rule books.

On that video conference, obtained by The Associated Press, IOC President Thomas Bach spelled out the large unknown.

“At this moment in time, no scientist can predict the health situation in 206 national Olympic committees at the time of the Olympics,” Bach told the athletes, adding the IOC was learning day to day and asked for the athletes' patience.

“In the playbook we are documenting what will be the typical journey for a stakeholder group starting with measures 14 days prior to departure," Ducrey said. “Including a test before you leave your county, a test upon the time you enter the country, and testing for each stakeholder group while they are in Japan.”

Olympics officials said they expect athletes to be tested at least every four days. They are being encouraged to arrive in Japan five days before their event and leave two days after.

Dubi was asked about fans. It seems clear that fans from abroad will not be allowed but he did not confirm it.

The rollout comes two weeks after a British newspaper, citing an unnamed Japanese government official, said the Olympics would be canceled. The IOC and Japanese organizers have pushed back for two weeks, and the Playbooks offer some concrete plans after months of vague talk.

“No matter what situation would be with the coronavirus, we will hold the games,” Yoshiro Mori, the president of the Tokyo organizing committee and a former Japanese prime minister, told lawmakers on Tuesday. “We should pass on the discussion of whether we will hold the games or not, but instead discuss how we should hold it.”

The Playbooks spell out strict behavior in regard to entering Japan and leaving the country. They deal with hygiene, testing, immigration and a code of conduct that will prohibit athletes from any tourism.

Olympic officials have documented thousands of sports events that have taken place in the last 10 months — some with fans, some without — and they believe they can do the same on an Olympic scale at dozens of venues spread across a Tokyo metropolitan area of about 35 million.

The IOC has said that 60% of the qualification spots for Tokyo are filled. Of the remaining 40%, 15% will be filled by rankings, as in tennis and golf, and the remaining 25% will come from test events, if they can be held.

The IOC and the Japanese government will not require “participants" to be vaccinated to enter the country. Vaccination will be voluntary, and the IOC says it will hold the games as if no vaccine were available and rely on social distancing, masks and testing.

Olivier Niggli, the director general of the World Anti-Doping Agency, was asked by athletes earlier in the week if a vaccine could trigger a positive doping test.

“The likelihood of having a positive doping test in relation to the vaccine is non-existent in the opinion or our scientists,” he said, adding scientists were cautious and looking at the possibility.

“At the moment," Niggli said, "there is no particular worry to have for the athletes.”