Tom Daley knits away in between dives at Tokyo Olympics 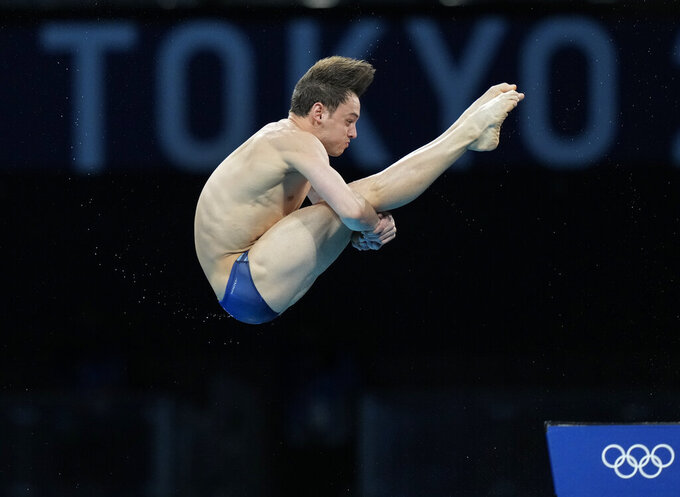 TOKYO (AP) — Tom Daley’s way of relaxing between dives off the 10-meter tower at the Olympics keeps him in stitches.

Not the laughing kind, but the knitting and crocheting kind.

The 27-year-old Brit took up the hobbies just before the coronavirus pandemic began locking the world down in March 2020. He taught himself by watching online tutorials, and learned from other divers and one of the British coaches, too. During lockdown, he had plenty of time to perfect his skills.

Daley knits only during the preliminaries of competitions, when there are long stretches between dives, as a way to switch off his mind.

“If you stay all the way up here with your energy levels and thinking about the dives," he said, "it ends up becoming quite draining by the end of it.”

Daley's handiwork has drawn attention online during the Tokyo Games. American comedian Leslie Jones was among those who was intrigued by the diver's way of staying calm.

“I mean whatever works,” she wrote on Twitter with a video of Daley creating his handiwork.

After knitting a dog sweater for a friend's pet, he began getting requests.

“One of the officials came up to me and has a little toy (dog), so I was actually knitting the toy a scarf,” he said. "I know it sounds really stupid, but I wanted something that was really simple that I didn’t have to think or count stitches or do anything like that. It was just, I wouldn’t say mindless, but it was more mindful.”

“It's kind of gone a little bit nuts,” he said.

Daley earned the first gold of his career when he and partner Matty Lee won the 10-meter synchronized title in Tokyo. On Saturday, Daley claimed a bronze medal in the individual platform, matching the color he won in the event at the 2012 London Games.

“I was just trying to have fun and enjoy these Olympic Games,” he said. “It's my fourth one. How cool is that?”

Daley hasn't ruled out diving in for No. 5 at Paris.

Too bad crocheting and knitting aren't Olympic sports, too.