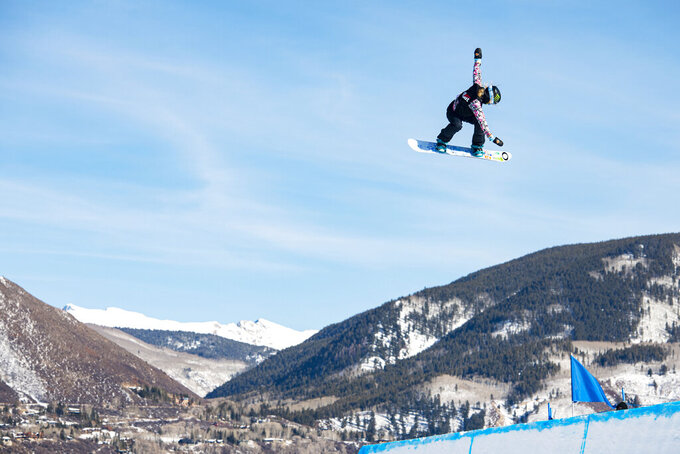 FILE - Snowboarder Jamie Anderson competes in the Winter X Games women's big air finals at Buttermilk on Sunday, Jan. 31, 2021, in Aspen, Colo. Even in a sport filled with nonconformists, Anderson stands out. The 31-year-old from South Lake Tahoe, California, is one of the most thoughtful people in her business. (Kelsey Brunner/The Aspen Times via AP, File)

COPPER MOUNTAIN, Colo. (AP) — There is part of Jamie Anderson that wishes these upcoming Olympics weren't in China.

The two-time snowboard gold medalist knows she's not the only Olympian who thinks that. One of the many things that makes her unique is that she is willing to say it.

Even in a sport filled with nonconformists, Anderson stands out. The 31-year-old from South Lake Tahoe, California, is one of the most thoughtful people in her business. Part of that, to her, means the question about whether to go to the Beijing Games, which are riven with conflicts about COVID-19, human rights, cybersecurity and more, should at least be something she can talk about freely.

“I definitely thought about protesting and standing up for what I think is right,” she told The Associated Press earlier this winter. “And I kind of had to find my yin and yang to that and link the pros and cons. And right now, I feel like I still want to pursue this Olympic journey because it really is such a gift to be on that world stage.”

The past few years have forced these kinds of calculations among athletes who want to use their platforms to speak out on a range of issues, but have been hemmed in by the Olympic rulebook. The U.S. Olympic team and the IOC have changed their guidelines in an attempt to better define how, and when, athletes can speak out during the Games.

All those guidelines, however, are being put to a different sort of test in the host country.

Rights groups have documented abuses in China, including forced labor, detentions and torture of Uyghurs. The world has been left to wonder about the safety of tennis player Peng Shuai. The U.S. government and others have announced a diplomatic boycott of the Games — a move designed to underscore their disapproval of China's policies, but one that stops short of keeping the athletes at home.

All of which has left it up to the athletes themselves to decide whether to attend, or speak up about issues in China or anything else on their minds. Very few have been willing to even talk about the issues encircling these Games, let alone sacrifice their Olympic spot. German slider Natalie Geisenberger was among the few to seriously weigh not going, but last week, she came to the same conclusion as so many of her fellow athletes.

“We only have the choice: Do I fly there and give everything or do I just let my sporting dream burst so close to the end?” she said.

A common theme among the few athletes who do speak up is that it wasn't their choice to put these Games in Beijing.

“It can feel very powerless when you read those things, because you think, ‘What can I do?’” American figure skater Timothy LeDuc said of some of the reports of abuses in China.

Noah Hoffman, an American cross-country skier who competed in the 2014 and 2018 Olympics, has been openly critical of the IOC and the Beijing organizers, yet he has said he hopes athletes “stay silent” in Beijing for fear they be punished.

With top-level sponsors, NBC and her own national governing body pushing forward for Beijing, Anderson said she has felt no groundswell among her U.S. teammates to stay home.

“A lot of the athletes I’ve spoken to, no one really wants to, and I’m not strong standing alone,” she said. “And I think it would be a really powerful stance. But I see that a lot of people have been working so hard to go and this might be their only shot.”

Anderson knows how big the Olympics can be for an athlete. She has has two gold medals in slopestyle and a silver in big air, which was added to the Olympic program four years ago.

She has made millions, in no small thanks to her top performance on the biggest stage. Earlier this week, she announced her engagement to Canadian snowboarder Tyler Nicholson. She has also tried to stay down to earth, focusing on conservation and women’s empowerment over her decade-plus at the top of the sport.

She has been unflinchingly honest about the conflicts her lifestyle creates — yes, she wants to be in touch with the planet that literally sustains her career, but she travels heavily and it contributes to global warming.

“It’s easy to get sucked into the system, whether you want to or not,” she said in a 2017 AP interview. “It’s hard to get out until you consciously make the decision. With how passionate I am about snowboarding, it’s hard to make that shift.”

Her passion, she said, has not waned in the ensuing years, so she, too, will head to Beijing, hoping her presence there might inspire others.

“I don't know (expletive) about politics," she conceded. “I feel like me not going isn’t going to make the world any less corrupt.”

And though the Olympics have always brought their own set of conflicts beyond whether to compete in China — snowboarders have never fully felt comfortable living in that world — Anderson said there is one overarching reason she keeps going, no matter where they are.

“At least for this one time in life,” she said, “the world comes together over sports.”