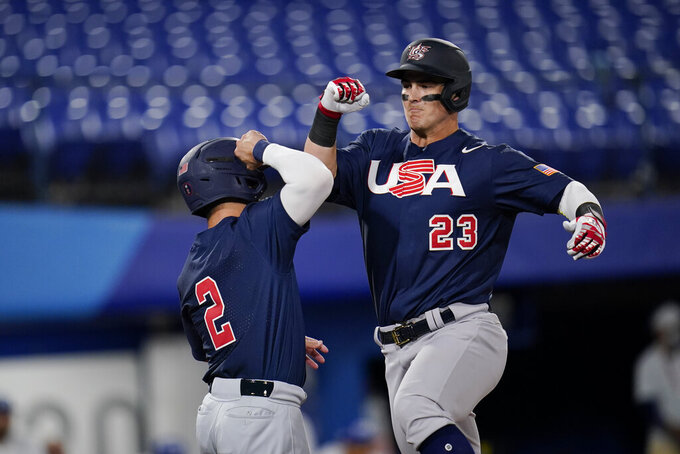 United States' Tyler Austin, right, celebrate with Eddy Alvarez after hitting a home run in the third inning of a a baseball game against Israel at the 2020 Summer Olympics, Friday, July 30, 2021, in Yokohama, Japan. (AP Photo/Sue Ogrocki)

YOKOHAMA, Japan (AP) — The United States started a pitcher who was Tampa Bay’s No. 12 prospect before he was dealt to Minnesota last week in the Nelson Cruz trade.

Israel went with a 30-year-old who has never pitched above Double-A and brought in the director of music programming at New York’s City Winery to relieve.

Such is Olympic baseball.

Joe Ryan allowed five hits over six innings in his first outing since he was swapped, and speedskating silver medalist Eddy Alvarez and Tyler Austin powered the offense to lead the United States over Israel 8-1 in the Americans’ opener on Friday night.

Ryan (1-0), a 25-year-old Triple-A right-hander, was in the dining hall when U.S. teammate Eric Filia told him Cruz was being sent to the Rays. Ryan looked at Shane Baz, his fellow Rays minor leaguer on the U.S. team, and Baz guessed one of them would be involved.

Ryan, likely within a year of a big league debut, relied on a 92 mph fastball. He gave one run and struck out three.

“He’s got really great stuff," said former major leaguer Danny Valencia, who homered on a fastball in the fourth inning. "I think the Twins are going be really pleased with him. I think that he's going to be one of their better pitchers for a lot of years to come.”

Denied players on 40-man major league rosters, the U.S. started a mix of prospects unneeded by major league teams this summer and released players. Nine of the 10 starters totaled a career WAR of -1.0; the other was Todd Frazier at 25.1.

Right-hander Joey Wagman (0-1) started for Israel and gave up three runs and four hits in three innings. Israel dropped to 0-2 in Group B of its Olympic baseball debut.

Israel brought in 42-year right-hander Shlomo Lipetz to relieve in the sixth inning as its fifth pitcher. He'll go back to City Winery after the Olympics.

“I play on weekends. I practice as much as possible — early in the morning, late at night,” Lipetz said.

He pitched in the 2017 World Baseball Classic, the 2019 European Championship and Olympic qualifying. Lipetz retired Boston prospect Triston Casas on a groundout, got Frazier to line into an inning-ending double play and gave up a single to Filia.

While Ryan is trying to reach the majors, Lipetz’s goal is more evangelical.

“I hope there’s a kid who’s watching in Israel in the afternoons, watching baseball, and saying: Hey, I want to do that,” he said.

Alvarez, who earned a 2014 medal in short track speedskating, is now a Miami Marlins' Triple-A player and was a flag bearer during last week’s opening ceremony. He looped a hanging curve off the end of his bat into short left field in the three-run third at empty Yokohama Stadium.

Austin, a former Yankee, is in his second season with the Central League’s Yokohama DeNA BayStars and got to be in his home clubhouse on the first-base side, though not his regular locker. He followed Alvarez by driving a high fastball on the next pitch over the right-center field wall for a 3-0 lead and added a pair of RBI doubles.

“I couldn't keep my heart rate down. It was crazy,” he said. “A pretty special night, to say the least.”

“This is kind of for me the icing on the cake for a long career,” Valencia said.

Frazier reached when Ian Kinsler bobbled his grounder in the sixth for an error and scored when Bubba Starling popped the ball into short left field and it hit off the glove of diving shortstop Scotty Burcham for an RBI single.

Starling added a run-scoring grounder in the eighth, and Casas singled in a run in the ninth.

Nick Martinez, a 30-year-old right-hander who has pitched in Japan since leaving the Texas Rangers after the 2017 season, starts Saturday against South Korea.

“Whoever wins this tournament has to play extraordinary baseball," U.S. manager Mike Scioscia said. "There's no gimmes. Every team is tough.”

Melky Cabrera hit a run-scoring single with two outs in the fifth and Jose Bautista threw out the potential tying run at home plate as the Dominicans (1-1) beat Mexico (0-1).

Charlie Valerio, a 30-year-old catcher with Sioux Falls in the independent American Association, doubled leading off the fifth against Theodore Stankiewicz (0-1), a 27-year-old right-hander who pitched in Boston’s minor league system and is with Tijuana. Cabrera, a 15-year big league veteran who last played with Pittsburgh in 2019, sliced a single to left.

Mexico threatened in the sixth after Isaac Rodriguez reached on a bunt single; a video review reversed the initial out call by the first base umpire. Rodriguez advanced on Valerio’s passed ball, and Joey Meneses singled to left.

Bautista, a six-time All-Star who is 40 and made his last big league appearance in 2018, threw a one-hop strike to Valerio for the tag. With two on and two outs, Daniel Espinoza hit a flyout that center fielder Emilio Bonifacio snagged with a backhand grab on the warning track.

Ángel Sánchez (1-0), a 31-year-old right-hander whose only time in the major leagues was eight games with Pittsburgh in 2018, allowed two hits in five innings. Luis Castillo, a 25-year-old Arizona Triple-A right-hander, got three straight outs for the save, completing a four-hitter.

Dominican second baseman Gustavo Núñez injured his left knee in a third-inning collision with Seattle prospect Julio Rodríguez on a flyout by Isaac Rodriguez that the right fielder grabbed as he struck Núñez. Yefri Pérez replaced Núñez to start the fourth. Rodriguez felt pain in his lips and chin, manager Hector Borg said, but stayed in the game.