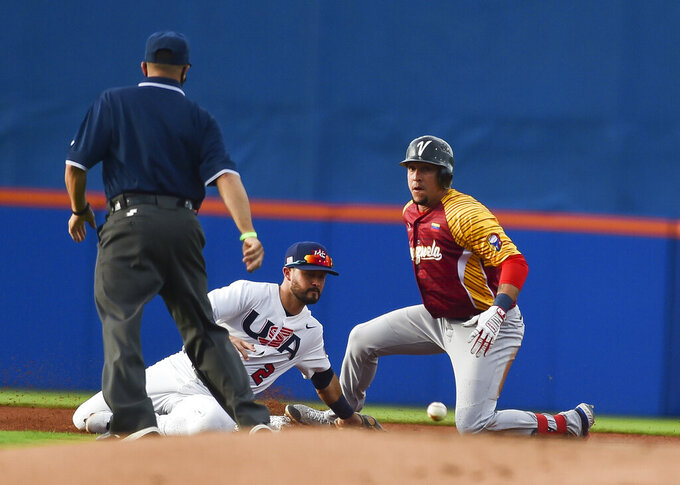 PORT ST. LUCIE, Fla. (AP) — Todd Frazier and his American teammates celebrated, dousing each other as if they had won the World Series.

“Playing for your country, it's the coolest thing in the world,” the 35-year-old third baseman said.

The United States qualified for the Olympic baseball tournament on its second try, beating Venezuela 4-2 Saturday behind Frazier’s 4-for-4 night that included a solo homer, RBI double and two singles.

Frazier even stole a base, started a key double play to get the U.S. out of trouble in the first inning and fielded the grounder for the final out.

"He's a guy that has kind of cemented the team. He's the keystone," U.S. manager Mike Scioscia said.

Before a pandemic-limited crowd of 2,202 at the New York Mets spring training ballpark, Frazier was spurred on by chants of “U-S-A!”

“I had one of my better games I've had in a long time," Frazier said. "And I just kept telling myself I'm not letting this slip away.”

Players did without the advanced video and computer metrics that have come to dominate the major leagues and determine who plays and what matchups to create.

“It goes to show you you really don't need most of that stuff," Frazier said. "It's baseball at the end of the day. You play for your country. You play for pride. We didn't hit on the field. We just hit in the batting cage — until our hands bled, to be honest with you. So we brought it back to youth days. Hit it. It doesn't matter who's throwing. Next guy up in line. And it really does go to show you guys that honestly, that guys really don't need video. All we need is a bat and a ball and a glove and the determination to be the best player you can be."

The U.S. finished 4-0 to win the Americas qualifying tournament and joined Japan, Israel, Mexico and South Korea at Olympic baseball, to be played in Japan from July 28 to Aug. 7 in Fukushima and Yokohama.

“Every pitch was intense,” Scioscia said, comparing it to “playing five elimination games in the playoffs or a pennant race, and you can't stub your toe, at all.”

A two-time All-Star, Frazier singled leading off the fourth against loser Aníbal Sánchez and scored on Eric Filia’s two-run homer onto the right field berm. Frazier hit an RBI double in the fifth for a 3-1 lead off Danny Rondon and homered in the seventh against Erick Leal, a drive off the facing of the bar behind the left-field wall.

Frazier was 3 for 35 for Pittsburgh this season before he was released on May 13.

“Was I upset? Sure. You want to play Major League Baseball as long as you can. But you move on,. I had a Plan B," Frazier said. “I can still play the game. I know it’s surprising to many people.”

David Robertson, who last pitched in the major leagues for Philadelphia in 2019, struck out two in a hitless ninth around a walk for his second save of the tournament. He retired pinch-hitter Alexander Palma, a Milwaukee prospect, on a grounder to Frazier for the final out.

Venezuela advanced to a final qualifying tournament from June 22-26 in Puebla, Mexico, which will determine one more qualifier from a field that also includes Australia, the Dominican Republic, Netherlands and Taiwan.

Venezuela went ahead in the on a third-inning home run by Hernán Pérez, who signed a minor league contract with Milwaukee last month after he was released by Washington. Pérez’s home run came off Cardinals prospect Matthew Liberatore.

Venezuela loaded the bases with one out in the first before Oakland Athletics minor leaguer Carlos Pérez hit a grounder to third, where Frazier started an inning-ending 5-4-3 double play.

Brandon Dickson, who wasted a ninth-inning lead against Mexico in November 2019 when the U.S. was three outs from qualifying at the Premier12 tournament, escaped two-on trouble in the fifth when Juniel Querecuto grounded to Frazier, then allowed an RBI double in the sixth to Washington Nationals prospect Ramón Flores that cut the lead to 3-2.

Liberatore, in his second start of the tournament, allowed one run and four hits in 4 2/3 innings

Japan, which is stopping the Central and Pacific League seasons to make its top players available, is considered the Olympic favorite. Major League Baseball doesn’t allowed its big league players to participate and MLB general managers often discourage the use of top eligible prospects.

Teams can change their roster before heading to Japan.

“To finish maybe my career, maybe winning the gold medal," Frazier said, “God Almighty, that would be the best icing on the cake.”

Notes: The Dominican Republic beat Canada 6-5 in the earlier game to finish 2-1 and advance to the final qualifier. Gustavo Núñez and Julio Rodríguez hit run-scoring singles off former Yankees prospect Evan Rutckyj in the eighth inning after a run-scoring single by Tigers prospect Daniel Pinero gave Canada a 5-4 lead in the top half.