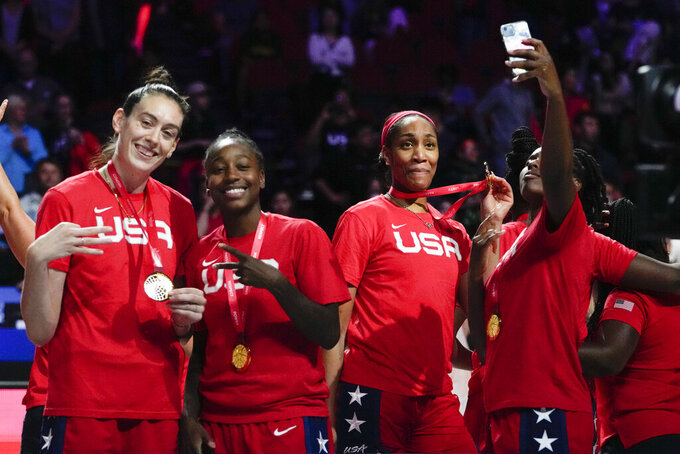 Gold medalists the United States celebrate on the podium after defeating China in the final at the women's Basketball World Cup in Sydney, Australia, Saturday, Oct. 1, 2022. (AP Photo/Mark Baker)

SYDNEY (AP) — A'ja Wilson and Breanna Stewart are keenly aware of the legacy of success they are part of with the U.S. women's basketball team.

They don't plan on letting the incredible run end any time soon.

“I don't think we're showing signs of stopping, that's for sure,” Stewart said. “We have a lot of people are entering their prime or are in their prime."

Wilson and Stewart helped the U.S. to a fourth consecutive World Cup championship Saturday with an 83-61 win over China, setting a record margin for a gold-medal game.

“Everyone knows that when you come here, when you wear USA across your chest the (pressure) that comes with it," Stewart said. "It's just embracing that. All the legends before us and what they've done, how they've won. Each team is different and we need to make our imprint on history.”

This team left its mark on the World Cup as one of the most dominant teams in the Americans’ storied history, winning four straight gold medals and 30 games in a row in the tournament. Next up for this group is the 2024 Olympics in Paris. The Americans will be trying for an eighth consecutive gold medal there.

“This is something that’s special to us. It’s not lost on us what’s been done since 1996. I hear about it all the time,” U.S. coach Cheryl Reeve said. “What I wanted to do is make sure this journey was fun. Because I think there’s some times when you have pressure to win or the perceived pressure, it takes the enjoyment out of it.”

What started with Sue Bird and Diana Taurasi has now been passed down to Wilson and Stewart. With Alyssa Thomas the oldest player at 30, the domination could continue for years to come.

“It’s been an incredible journey just to continue to lay that foundation down like so many of the greats in front of us have,” Wilson said. “Now it’s our turn to step up and be in that situation.”

“Maybe around the world they kind of looked at it and said, ‘Hey now’s the time to get the USA,’” Reeve said. “I think what we showed is that our league, the WNBA and professional basketball players in the United States are really, really good.”

As they’ve done all tournament, the Americans did it on both ends of the court, playing stellar defense as well as using a high-powered offense.

The game was a sellout with nearly 16,000 fans — the biggest crowd to attend a women’s World Cup game since the inaugural tournament in 1953 in Chile.

“You can't say people don't support women's basketball,” Stewart said of the crowd. “If you look at all these people in this arena tonight. There was a lot of people cheering for us and against us, but they're here watching women's basketball.”

While the U.S. will be the heavy favorite to win the gold in Paris, there are new teams emerging. China won its first medal since the 1994 World Cup, and Canada reached the medal round for the first-time since 1986.

“I think every team will learn from this experience. You gain a lot of knowledge in the World Cup,” Reeve said.