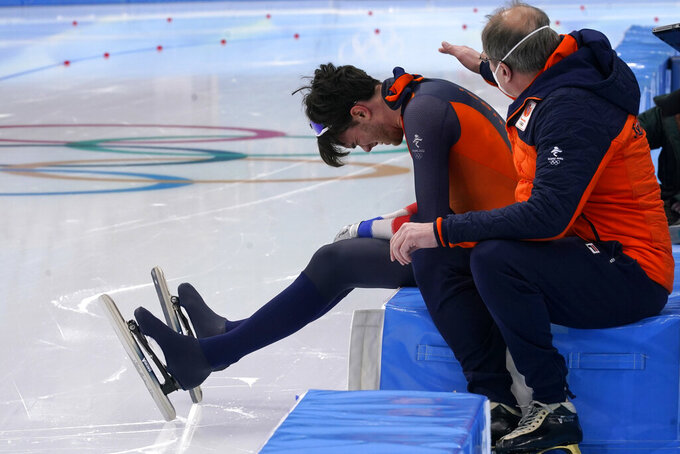 Patrick Roest of the Netherlands reacts after his heat in the men's speedskating 10,000-meter race at the 2022 Winter Olympics, Friday, Feb. 11, 2022, in Beijing. (AP Photo/Sue Ogrocki)

BEIJING (AP) — Nils van der Poel spoke his mind, then got back to racing.

Turns out, it was just him against the clock.

The Swedish speedskater broke his own world record and captured his second gold medal of the Beijing Olympics with a dominant victory in the men’s 10,000-meter Friday.

Van der Poel added to his victory in the 5,000, which was a much closer affair.

The longest race on the Olympic program was a blowout.

“We wanted to have a good set-up to break the world record, but we didn't want to Hail Mary it too much,” said van der Poel, who had 12:35 as his goal. “I felt like that was reaching for the full capacity but not stretching it too much.”

He underestimated what he had in those powerful legs.

He almost did, stumbling a bit with about 2 1/2 laps remaining. But van der Poel managed to stay on his feet, swung both arms to build extra speed and breezed across the line with plenty of time to spare in 12 minutes, 30.74 seconds.

The Swede easily broke the world mark of 12:32.95 that he set in February 2021 and was more than 9 seconds ahead of the Olympic record set four years ago by reigning champion Ted-Jan Bloemen of Canada.

The silver medal went to Patrick Roest of the Netherlands, the same spot he took behind van der Poel in the 5,000, but this time he was nearly 14 seconds off the winning pace in 12:44.59.

“I'm feeling good,” Roest said. “I think the silver medal was the highest I could get today because Nils was just way better than the rest.”

Van der Poel’s victory came after he ripped the Dutch federation over a report that it was trying to influence ice makers and other officials at the Olympic oval to set up conditions that benefit its skaters.

While saying he had nothing against athletes from the Netherlands, van der Poel called the report a sign of “corruption” that needed to be investigated by the IOC and the International Skating Union.

“It's not fun to be the guy saying the word ‘corruption,’” van der Poel said. “But I think it's my moral obligation to protect the morals of the sport. That's more important than winning.”

Dutch officials shrugged off the complaints, but van der Poel had no regrets about taking on such a hot-button issue while in the midst of competing at the Olympics. He said he's received support from plenty of other competitors.

“I've had skaters around the village saying, ‘Thank you for taking a stand,'" he said.

After his performance in the 5,000, the Dutch skater thought he might have a chance to knock off van der Poel.

Actually, he had no chance.

“You don’t expect Nils to go 2 seconds under the world record,” said Roest, who skated in the second of six pairs in the 25-lap event. “I just tried to give my best, and then just see what Nils is doing. Apparently, he was way better than I was today. I have to be happy with silver.”

Davide Ghiotto skated in the next-to-last pair with van der Poel and could barely see him up ahead.

But the Italian’s time of 12:45.98 stood up for the bronze, setting off a raucous celebration on the infield as he was swarmed by teammates and coaches.

Ghiotto recognized that van der Poel was in a class of his own.

“I just knew that he can do a new world record,” Ghiotto said. “He is very, very strong.”

Bloemen finished eighth, backing off during his race to conserve his energy for the team pursuit.

“I went out to try to get the best rhythm that I could,” he said. ”Halfway, I found out that I couldn't maintain the lap times I needed for a medal. So I had to think about the team pursuit that's coming up in two days."

Jorrit Bergsma of the Netherlands failed to become the third skater to win three medals in speedskating's longest Olympic race. He finished fourth, about 3 seconds behind Ghiotto. Bergsma won the gold in 2014 and a silver in 2018.

“I was hoping for a medal here and I just didn’t have it today,” Bergsma said. "I didn’t skate the race I could, so I’m really disappointed.”

Van der Poel is the only skater standing up to the powerful Dutch teams, which has won the other four events at the Ice Ribbon oval and eight medals overall.

Roest said of his Swedish rival: “We have a gap to close.”