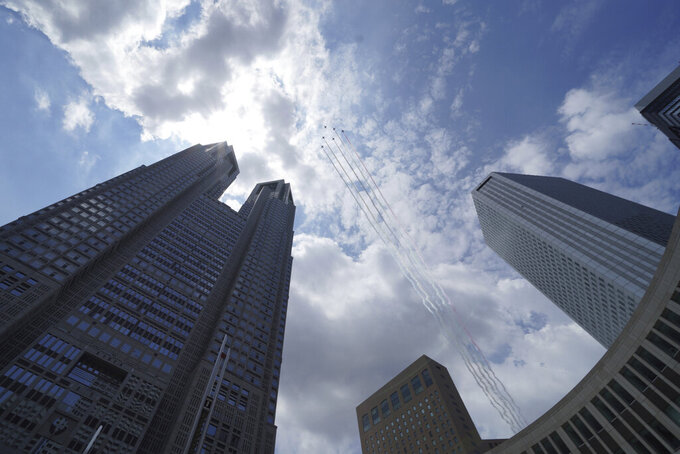 TOKYO (AP) — Japan's prime minister met with Pfizer's CEO in an unusually high-profile setting Friday to make sure the drugmaker would deliver the COVID-19 vaccine as promised by this fall as the nation faces supply concerns and a growing outbreak.

Pfizer Inc. CEO Albert Bourla, who is in Tokyo to attend Friday's opening ceremony of the Olympics, was greeted by Prime Minister Yoshihide Suga at the Akasaka Palace state guest house, usually used to welcome heads of state. Suga’s special hospitality for Pfizer's leader comes as Japan is seeing its vaccination drive slow as local officials pressure the central government for speedier and stable deliveries.

During their nearly one-hour breakfast meeting, Suga explained Japan’s ongoing virus resurgence and vaccine status. Suga and Burla discussed a stable shipment of the vaccine, and Suga stressed that vaccines are the “trump card” in restoring social and economic activities, officials said.

Suga also thanked Burla for donating tens of thousands of doses of Pfizer vaccine for Olympic athletes and participants to ensure their health during the pandemic-delayed games, government officials said.

Taro Kono, a state minister in charge of vaccinations, joined the two at the state guest house, Japanese media reported.

Japan has signed with Pfizer to receive 100 million COVID-19 vaccine doses by June, and additional 70 million between July and September.

About 23% of its population of more than 126 million has been fully vaccinated, a number that has picked up since May but is still far short of where Japan’s government had hoped to be before the Olympics. Younger people are largely unvaccinated.

Burla, who has Greek and Jewish background, thanked Suga for the warm hospitality and wished Japan a successful Olympics. Their meeting came the day after Olympic organizers dismissed the opening ceremony director over a joke he made about the Holocaust.

Japan has weathered the pandemic better than many other countries, logging about 853,000 cases and 15,100 deaths since the pandemic began. But infections have been surging, with Tokyo itself hitting a six-month high of 1,979 daily cases on Thursday.

Spectators are banned from all venues in the Tokyo area, with limited audiences allowed at a few outlying sites, in a step taken to try to curb the spread of the coronavirus. But Suga’s government has been criticized for what some say is prioritizing the Olympics over the nation’s health.