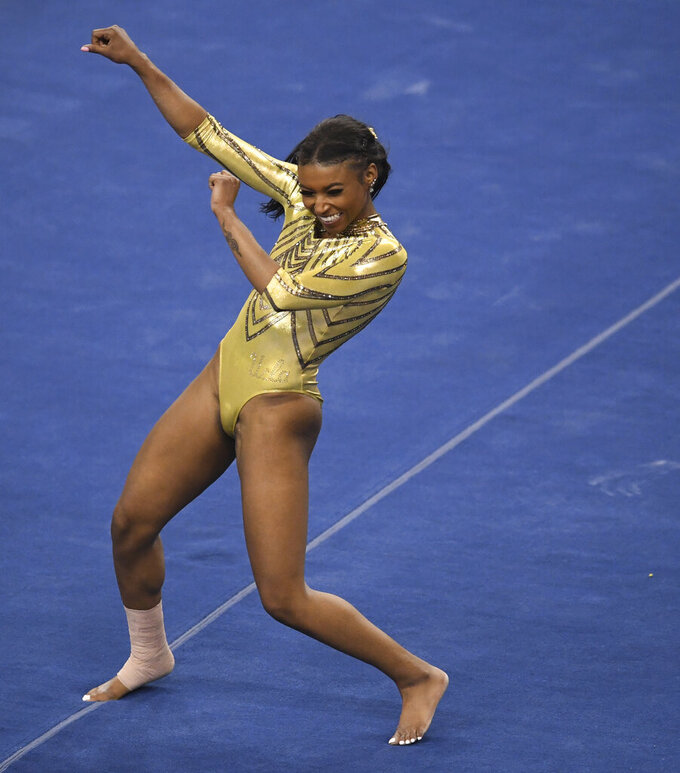 UCLA Bruins gymnast Nia Dennis competes in the floor exercise against BYU during a gymnastics meet in Pauley Pavilion on the campus of UCLA in Los Angeles on Wednesday, Feb. 10, 2021. (Keith Birmingham/The Orange County Register via AP)

PITTSBURGH (AP) — Samantha Snider remembers the rules — be they real or implied — during her collegiate gymnastics career at Arkansas.

“There was very much this message, ‘You need to fit in this box,’” said Snider, now the head coach at the University of Pittsburgh.

Snider, who jokes she often felt like the only Puerto Rican in the state during her time competing for the Razorbacks in the mid-2000s, isn't being critical. Her experience at Arkansas was simply reflective of the culture at large in the sport at the time.

A time, it seems, that is finally over, particularly at the NCAA level. From Pittsburgh to California, female gymnasts are using their platform to empower, educate and bring light to causes they believe in.

When the Panthers host Temple on Sunday at the Petersen Events Center, they will compete in leotards with “BLM” emblazoned in all its sequined glory on their left arms, while coaches and staff members wear “Black Lives Matter” T-shirts. The idea for such a visible statement arose during a video call last summer after the police killings of Breonna Taylor, George Floyd and other Black Americans gave rise to intensified calls for social justice.

Pitt's women's program is largely comprised of white athletes, and simply telling their Black teammates they had their unconditional support wasn't enough. Putting on a shirt before a meet — only to pull it off while on the competition floor — wasn't enough. A sticker on their bag wasn't enough. Even putting together a public service announcement in which the Panthers vowed to “promote active change" wasn't enough.

So they brainstormed, eventually deciding to add “BLM” in big, bold, silvery sequins to the left sleeves of their leotards. The fact it's the same sleeve the Panthers use when they huddle and break as a team isn't a coincidence. They believe the image of more than a dozen arms of athletes of various races leaning in together is a powerful one, particularly for sophomore Ciara Ward, one of two active Black gymnasts on the team.

“They wanted to support me as a Black athlete," Ward said. "At the end of the day, they wanted to speak out against what they know is wrong.”

Ward remembers watching the 2012 Summer Olympics when Gabby Douglas became the first Black woman to win an all-around title. That victory resonated with Ward, then a 12-year-old growing up in Maryland who wondered how far the sport could take her.

“Personally I would say (gymnastics) is a predominantly white sport,” Ward said. “Sometimes when you don't see representation, you feel like you can't do something.”

Watching Douglas have Olympic gold draped around her neck changed Ward's whole mindset. It carried her to Pitt, a place she said greeted her with open arms. More than a year into her collegiate experience, Ward understands she and her teammates have the ability — and in some ways, a responsibility — to make an impact in ways that stretch far beyond her sport.

If that means taking a risk by turning their meets into a crossroad of sports, society and politics due to their wardrobe choice, so be it.

“I think it's extremely important to provoke a larger conversation,” Ward said.

A conversation that's one of many being held in her sport these days. Over the last decade, gymnastics in general and women's college gymnastics in particular has been at the forefront of the fight for inclusion and diversity. North Carolina sported T-shirts promoting the “Be True” campaign in 2017 to support the LGBTQ community, and “Pride” meets are becoming more commonplace.

Amid the fallout of the Larry Nassar scandal, Olympic champion Simone Biles rocked a teal leotard at the 2018 USA Gymnastics championships honoring survivors of sexual abuse, a group of which she is a part. College gymnastics became a sanctuary of sorts, a place for the sport to begin healing itself from the inside out, a place where those harmed by Nassar and other abusers found strength.

The platform keeps growing, extending to the empowerment of Black athletes and social justice movements. UCLA senior Nia Dennis' floor exercise routine — which she dubbed “The Culture” — went viral last month thanks in part to her music, a mash-up of hip-hop icons Kendrick Lamar and Tupac Shakur.

“The purpose of my floor routine is to open the eyes of those around me and also shine a light on Black excellence,” Dennis said.

Michelle Obama noticed. Alicia Keys and Biles, too. Yet Dennis stressed the goal isn't to wow as much as it is to inspire.

“I didn’t have very many people to look up to,” she said. “So my goal is to always inspire young Black gymnasts.”

The link between the performance of Dennis and teammate Margzetta Frazier — who unleashed a Janet Jackson-inspired routine this week that caught the legendary artist's attention — and what is happening at Pitt this weekend is real. Call it the byproduct of taking the paradigm of what coaches used to think the idea of being a “good teammate” was and turning it on its head.

“It felt like if you let the reins go with your student-athletes, that somehow they’re going to run down a terrible dark path, and them discovering who they truly are would be antithetical to being the best team player they can be,” said UCLA women's coach Chris Waller. "It’s been a long process to realize that it’s the opposite that's true.

At Pitt, that movement is capturing a moment while also attempting to make a lasting impact. The “BLM” leotards have captured attention. But they're not going away Sunday night. Instead, they will remain in the program for years to come, a tacit understanding that progress can't be made in a day or a week or a month but a generation. Persistence and vision are a vital part of that process.

“We wanted to make a point that this is something we live by," Snider said. "It's something we feel very strongly about. So we want it to be bold.”