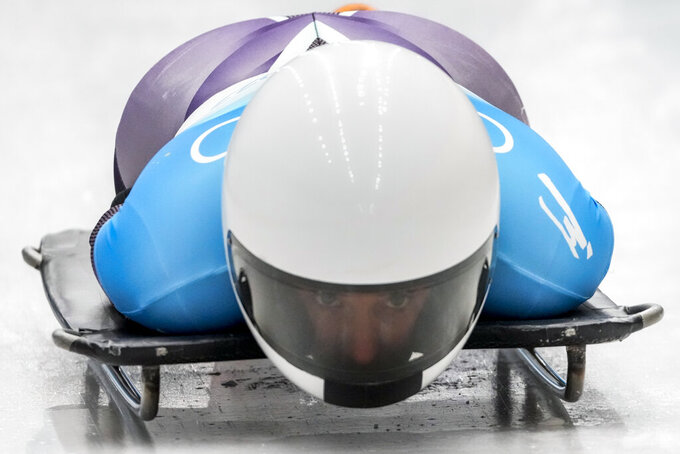 Katie Tannenbaum, of Virgin Islands, slides during the women's skeleton run 3 at the 2022 Winter Olympics, Saturday, Feb. 12, 2022, in the Yanqing district of Beijing. (AP Photo/Dmitri Lovetsky)

It didn’t upset her whatsoever.

Nor should it, considering her story: She overcome long odds to just to get to the Beijing Games. The California native competes in skeleton for the U.S. Virgin Islands, where she has lived since 2007. Her claim to racing fame before now was sliding headfirst into a broom that was dangerously left in the track during one of her runs two years ago. She made the Beijing Olympics only after Sweden and France declined to send athletes to the race.

And if all that wasn’t enough, she was about two hours away from having to withdraw from the Olympics. She tested positive for COVID-19 last week and had to miss out on a chance to carry her nation’s flag in the opening ceremony, then didn’t get cleared to race until just before the final session of training for the race.

“It was a very stressful week,” Tannenbaum said.

She can laugh about it now, with good reason. It took the 36-year-old Tannenbaum a long time to get to the Olympics. She thought she qualified for the 2018 Pyeongchang Games, but sliders from other nations were chosen instead to fill out that field.

“Sure, there were brief moments I thought about being done, but I think I would have been more likely to retire if I had gone in 2018, and at the end of the day I’m glad I didn’t,” Tannenbaum said. “I have evolved a lot as an athlete over the last four years and am very proud of the goals I have hit, or exceeded, in that time.”

It’s a resiliency that she’s seen from the island nation she calls home.

The Virgin Islands were ravaged by Hurricane Irma in 2017, a Category 5 — the worst kind — of storm that caused nearly $4 billion in damage. Two weeks later, another Category 5 storm in Hurricane Maria hit as well, though its impact was not as damaging as Irma was.

Tannenbaum wasn’t there for the storms. She was training in Canada, but the mental strain at the time was massive.

“I knew I was lucky that I was off-island, but I also hated that I wasn’t there with my community,” Tannenbaum said. “I remember walking onto the training floor the day Irma was going over us and knowing I was in no mental state to be training."

She kept going, dealt with the disappointment of missing Pyeongchang, has rolled with the ups and downs since. Because of her virus-related troubles, she got only two training runs in Beijing — nowhere near enough to learn the track.

Didn’t matter. She hopped off her sled Saturday night, enormous smile across her face, waving the Virgin Islands flag.

Getting here was the win.

“I think being called ‘inspiring’ is one of the greatest compliments one can receive," Tannenbaum said. “If I hear that from even one person, I feel like I’ve made an impact."