WHAT TO WATCH: Valieva's free skate, Bowe on the oval 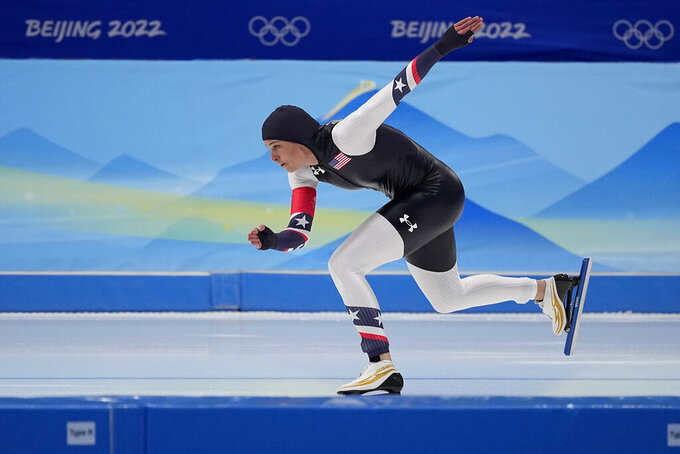 It remains to be seen how much longer it will be adjudicated.

Kamila Valieva is in first place after the short program. That part isn't a surprise — but the 15-year-old Russian's path to this point has been anything but smooth. And there's no indication that will change anytime soon.

Valieva's positive drug test from an event in December put her participation in doubt, but the Court of Arbitration for Sport ruled that she could compete while officials conduct a full investigation. The free skate could be a big draw in the U.S., even though no American is higher than eighth after the short program.

NBC plans to show the free skate in prime time. For the early risers, USA Network will air it live at 5 a.m.

If Valieva finishes in the top three, the International Olympic Committee has said there will be no medals ceremony. The Russians have a chance to sweep the top three spots, with Anna Shcherbakova second and Alexandra Trusova fourth after the short program.

Valieva's free skate is to Maurice Ravel's “Bolero” — a popular skating tune that ice dancers Jayne Torvill and Christopher Dean famously performed to at the Sarajevo Games in 1984.

The U.S. and Canada both missed the semifinals of the men's hockey tournament, the first time that's happened since 2006. Instead, Finland faces Slovakia and Sweden takes on the Russians. The Finland-Slovakia game is scheduled to start at 11:10 p.m., live on USA Network. Slovakia beat the Americans to reach that game.

The freestyle skiing halfpipe is the final event for Eileen Gu, the U.S. native who won gold in big air and silver in slopestyle while competing for China.

Both NBC and USA Network will have live coverage of the halfpipe final in prime time.

Brittany Bowe already made a big contribution to the U.S. medal haul when she gave up her spot in the 500 meters so teammate Erin Jackson could compete. Jackson then won the event.

Bowe, a fine skater in her own right, finished 10th in the 1,500 and 16th in the 500. She is the world record holder in the 1,000, which she'll compete in on Thursday. USA Network plans to show that live early in the morning, with an encore presentation by NBC in prime time.

Dutch legend Ireen Wust, who is now up to 13 career Olympic medals after adding a gold and a bronze this year, is expected to compete for the final time at the Olympics. She's planning to retire.