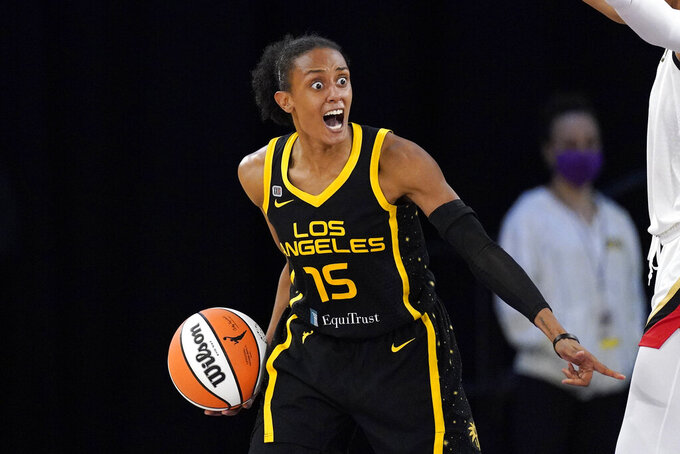 NEW YORK (AP) — With less than a week remaining before the WNBA begins its Olympic break, teams are jockeying for position in the standings knowing that it will be a sprint to the finish once play resumes in August following the Tokyo Games and a monthlong hiatus.

Las Vegas, Seattle and Connecticut have already created a little separation from the pack as the top three teams in the league. The Aces and Storm are battling for supremacy in the Western Conference to earn a spot in the Commissioner's Cup championship. The Storm hold a one-game lead on the Aces.

After the top trio, eight teams are within four wins of each other. Only Indiana is lagging behind with just two victories.

“It was huge. I think in particular because we had the same record, so to get that win was big for us," Liberty guard Sami Whitcomb said. "To string together a couple of wins... In terms of building momentum, in terms of feeling good, it was massive.”

The Liberty currently are sitting in seventh in the AP power poll this week as Las Vegas continues to lead the way.

1. Las Vegas (14-4): The Aces keep rolling, setting a franchise-record for points in a game when they beat Atlanta 118-95 on Sunday. Las Vegas added Kiah Stokes, who was cut by New York, to give the team more veteran post depth.

2. Seattle (14-4): Jewell Loyd had to miss the team's last game with an ankle injury and while the Storm were able to win without their star guard, they hope she'll be ready for the final games before break against Los Angeles and two against Phoenix.

3. Connecticut (12-6): The Sun look to rebound from a disappointing loss to Indiana with games against Atlanta and New York. One more win or loss by Chicago to Washington clinches the Eastern Conference bid to the Commissioner's Cup for the Sun..

4. Chicago (10-9): The Sky have followed up a seven-game winning streak by losing two of their last three games. The defense has been a problem as the team gave up 100 points to Dallas in one of the losses.

5. Minnesota (9-7): The Lynx have won four straight and five of their last six games thanks to the strong play of Napheesa Collier and Kayla McBride.

6. Dallas (9-10): The Wings have been struggling on defense lately, giving up over 91 points in their last three games. They have averaged 95 points though in those games.

7. New York (10-9): Sabrina Ionescu is on a minutes restriction because of her ankle, but she been making the most of her playing time. She matched her career-high with 12 assists in Monday night's win over Dallas. She isn't expected to play more than 30 minutes until after the Olympic break.

8. Phoenix (7-9): The Mercury really struggled on offense against Minnesota, averaging just 72 points in two losses against the Lynx. Things don't get any easier for Phoenix with games against Las Vegas and two against Seattle before the break.

9. Washington (7-10): The break can't get here soon enough for the Mystics, who need to get healthy and get Tina Charles some help on offense. Washington has dropped four straight games.

10. Atlanta (6-11): The Dream have lost five of six games with Courtney Williams being one of the few bright spots.

11. Los Angeles (6-11): The Sparks are on a four-game losing skid and still are beset by injuries with Nneka and Chiney Ogwumike and Kristi Toliver all out. Los Angeles is averaging just under 75 points a game, which is second worst in the league.

12. Indiana (2-16): The Fever finally ended their 12-game skid with a surprising victory over Connecticut. They have gotten solid play from 6-foot-10 Hungarian center Bernadett Határ — when she can stay out of foul trouble.

Kayla McBride of Minnesota had a stellar week, averaging 25 points while making 18 of her 26 shots from the field to help the Lynx win both their games against Phoenix. Other players receiving votes included Tina Charles of Washington, A'ja Wilson of Las Vegas and Brionna Jones of Connecticut.

The Dream suspended guard Chennedy Carter indefinitely on Monday night for conduct detrimental to the team. The team lost to Las Vegas on Sunday and the 22-year-old played just 5 minutes, 34 seconds before going to the bench and not returning. Coach Mike Petersen said afterward it was not because of an injury, but something the team was “dealing with,” without giving more details.

Lynx at Aces, Friday. McBride makes her first return to Las Vegas where she starred for the franchise before signing with the Lynx in the offseason. The Notre Dame graduate was drafted by the team when they were still in San Antonio.