WNBA teams ready for sprint to the finish of regular season 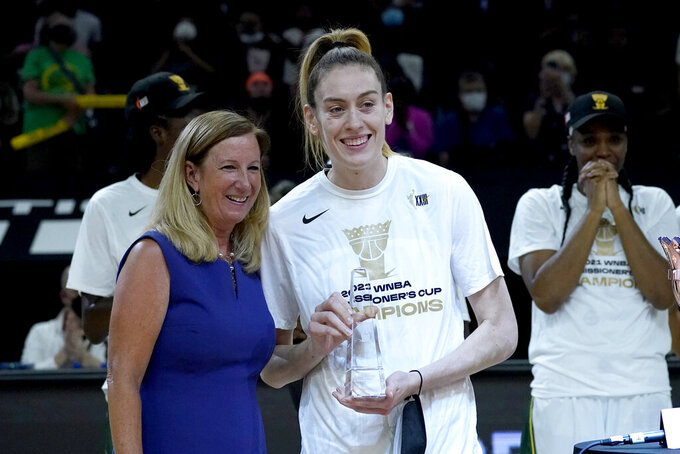 NEW YORK (AP) — After a month break for the Olympics the WNBA is back with a sprint to the playoffs.

The league had its first-ever Commissioner's Cup championship, which Seattle won in a rout of Connecticut. Commissioner Cathy Engelbert was excited for the inaugural Cup final and sees great things ahead for the new in-season tournament.

“I was really pleased overall with how it went,” she said in a phone interview. “I'm still capturing all the feedback on it.”

Engelbert had hoped that the tournament would give more significance to the first half of the season and would build rivalries and of course add more compensation to players. Seattle players each earned roughly $30,000 for the 79-57 victory, and Connecticut's share was $10,000.

“There were no major hiccups and I think now that players and media know what it is,” the Commissioner said. “This was going to be our pilot year to see what it is. We went out there and took some risks in putting this on. We hope to do more local activations in the community during the 10 games people play leading up to the championship. We couldn't do it this year because of COVID. Next year we’ll be in a better position."

Engelbert said the league is still trying to find the right time to host the championship game in the future. With the league returning from an Olympic break last week, she thought the timing worked well this year as a tip-off to the second half of the season.

“We'll evaluate the where and when because of the FIBA World Cup as there's no Olympic break in the middle," she said. “Given the footprint of next season, it has to be a little earlier.”

Now the teams are ready for the month-long race to the playoffs.

1. Seattle (16-6): The Storm are on a pivotal five-game road trip that has stops in New York, Washington and Minnesota. An overtime loss to Chicago came without Sue Bird and Breanna Stewart, who were resting after playing in the Olympics.

2 Las Vegas (16-6): The Aces rallied from a 21-point deficit to beat Washington in the team's first game back. With A'ja Wilson and Liz Cambage leading the way, Las Vegas is proving it may be the team to beat this season.

3. Connecticut (15-6): The schedule favors the Sun with five straight home games as the team hopes to catch one of the top two teams in the league and earn the double-bye in the playoffs.

4. Minnesota (13-7): The Lynx picked up right where they left off, winning an eighth consecutive game. Now they'll be challenged on the road with two games in Connecticut and one in Chicago.

5. Chicago (11-10): The Sky are healthy and poised to make a run to the playoffs over the final month of the season.

6. Phoenix (10-10): The Mercury have their big three healthy and ready to go with Skylar Diggins-Smith, Brittney Griner, and Diana Taurasi poised to lead the team to the playoffs.

7. Washington (8-11): The Mystics are finally starting to get healthy with the return of Myisha Hines-Allen and Natasha Cloud to the lineup. Elena Delle Donne has started to practice and should return to the active roster soon.

8. New York (10-12): The break provided a chance for the Liberty to get healthy as Sabrina Ionescu and Natasha Howard are back at full strength. Howard scored 30 points in her return to the court after being sidelined in late May with an MCL strain.

9. Dallas (9-13): The Wings have dropped four in a row, including a blowout loss to Connecticut to open the second half of the season.

10. Los Angeles (7-13): The Sparks welcomed back Nneka Ogwumike and Kristi Toliver from injury and held on to win against Indiana, ending a six-game skid. Los Angeles is also playing back in Staples Center for the remainder of the season.

11. Atlanta (6-14): The Dream have dropped five straight games and have a new coach after Mike Petersen stepped aside because of health issues. Atlanta also signed Candice Dupree during the break to add veteran leadership to the young team.

12. Indiana (4-17): The Fever saw their three-game winning streak come to an end in Los Angeles. The team got a strong effort from Kelsey Mitchell and Victoria Vivians, who had 10 points off the bench.

Breanna Stewart welcomed a new baby into the family a day after winning a gold medal at the Olympics. Stewart and her wife, Marta Xargay Casademont, revealed their daughter Ruby Mae Stewart Xargay was born via surrogate on Aug. 9.

The Chicago Sky's overtime victory over the Seattle Storm on Sunday was the most watched WNBA regular season game since 2012, drawing 755,000 viewers. That high number came with Sue Bird and Breanna Stewart resting while recovering from the Olympics.

“It was a great game, I was going crazy at home,” Bird said. “We consistently as a league are breaking records in terms of viewership and outdoing the expectations in a lot of different categories. Hopefully we can get a place where we aren't outdoing them, but it's expected to be done.”

Lynx at Sun, Tuesday and Thursday. Two of the top four teams in the league will meet twice in three days. The Sun had their roster together to train for most of the Olympic break while the Lynx had stars Sylvia Fowles and Napheesa Collier playing in the Tokyo Games.