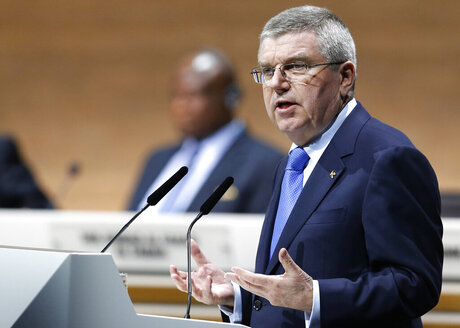 BERLINCopyright 2020 The Associated Press. All rights reserved. This material may not be published, broadcast, rewritten or redistributed.
52.524413.4105

"But neither anger nor fear are good advisers. Therefore one in responsible position has to ask straight away, how do you deal with this? What can you do to ensure that it hopefully never happens again?" Bach told the Frankfurter Allgemeine Zeitung newspaper in an interview.

Bach defended the International Olympic Committee's decision not to ban Russia from the Rio de Janeiro Olympics following McLaren's first report in the summer, but acknowledged the fight against doping had suffered.

Bach praised the report, saying it "gives answers to many questions that were unanswered in the first report."

He referred to Germany's past doping scandals and rejected the suggestion that it was a mistake to allow athletes from the former East Germany, which operated a comprehensive state-sponsored doping program, to compete at the 1992 Olympics in Barcelona.

"People should not be punished for a system for which they can do nothing," Bach said. "No one called for a collective punishment for all German athletes."

He said the IOC will scrutinize individual Russian athletes and their coaches through a committee chaired by Swiss board member Denis Oswald.

"We will analyze all the samples from Russian athletes at the 2014 Winter Games in Sochi again, especially for signs of manipulation. We'll apply the same procedure for all Russian athletes in London 2012," Bach said.

Referring to Russian denials of wrong-doing, Bach said, "I could have imagined a different reaction. But now what's decisive is how will the Russian reaction turn out before the hearings of the IOC commissions?"