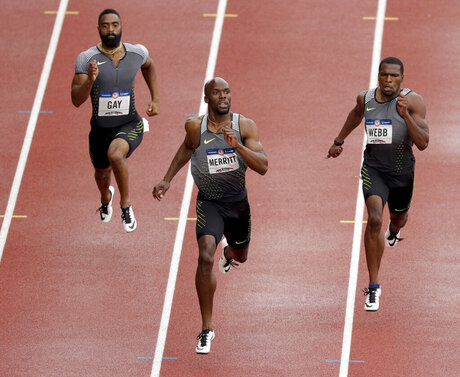 By: EDDIE PELLS (AP), PAT GRAHAM (AP)
EUGENE, Ore.Copyright 2020 The Associated Press. All rights reserved. This material may not be published, broadcast, rewritten or redistributed.
44.0521-123.087

EUGENE, Ore. (AP) — Consider this a second chance for Tyson Gay. Maybe his last one, too.

The 33-year-old sprinter was handed a spot on the U.S. Olympic track team as a relay runner Monday, more than two years after his doping positive cost the Americans their silver medal from the 2012 Games.

Gay dominated the sprints for a time before Usain Bolt burst onto the scene in 2008. The American is still ranked second all-time behind Bolt with a time of 9.69 seconds in the 100.

But the last several years have been a struggle, filled with injuries and setbacks — none bigger than a positive doping test in 2013 that cost him one year out of the sport and forced the relay team to surrender its medal.

Gay finished fifth in the 100 and sixth in the 200 at the recently completed Olympic trials, but coaches stuck to the order of finish for the 100 meters, taking Gay and sixth-place finisher Christian Coleman, along with Mike Rodgers, whose spot was locked in thanks to his fourth-place finish.

In Gay, the U.S. gets a two-time Olympian and 2007 world champion at both 100 and 200 meters — choosing him over high-schoolers Noah Lyles and Michael Norman, who finished 4-5 in the 200 at trials.

Asked before the trials what it would mean to make the team, Gay said: "A hell of a lot. I'm considered the old one of the bunch now. It definitely means a lot to me to still keep up with these young guys here, use some of my veteran skills to my advantage."

Some other things to know about the U.S. track and field team:

LIKE A FINE WINE: At 41, Bernard Lagat is still going strong — making his fifth Olympic team. The ageless 5,000-meter runner showed just about everyone that age is merely a number. "I don't believe I'm old," Lagat said. "If you believe you're old — I'm going to run like an old man."

JUST A KID: For a few days, 18-year-old high jumper Vashti Cunningham was set to be the youngest to compete for the U.S. Olympic track team in four decades. That lasted until 16-year-old Sydney McLaughlin came along and made the team in the 400-meter hurdles and took that distinction. To think, she had a little case of stage fright to begin the trials. It hardly showed as she set the world junior record to finish third and earn her place in Rio. "This has to be the icing on the cake," the prep star from New Jersey said. "Regardless of what happens in Rio, I made it here and I'm just so thankful for all of that."

FEEL-GOOD STORY ENDS WELL: 800-meter runner Boris Berian made the team despite an uphill climb — working at McDonald's after dropping out of college to earn extra money to train and recently winning a lawsuit over Nike over what gear he could wear that nearly kept him off the starting line.

FEEL-GOOD STORY ENDS NOT AS WELL: 110-meter hurdler and defending Olympic champion Aries Merritt finished fourth — missing the team by one spot less than a year after returning from a kidney transplant. He had a positive outlook, though. "For me to be where I am is a miracle," said Merritt, who operated at 10 percent kidney function when he captured a bronze medal at the 2015 world championships last summer.