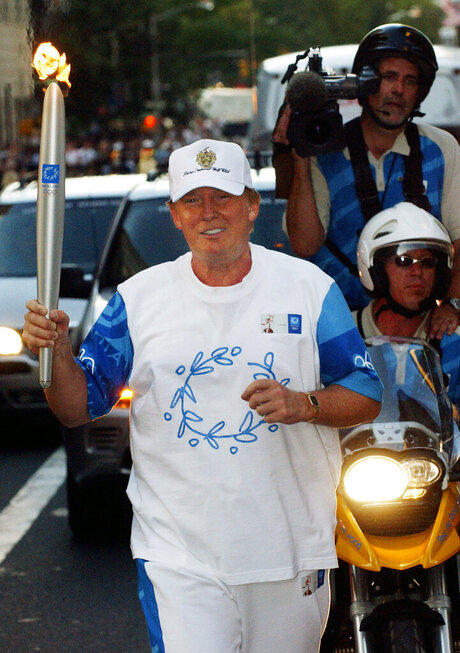 By: EDDIE PELLS (AP)
NEW YORKCopyright 2020 The Associated Press. All rights reserved. This material may not be published, broadcast, rewritten or redistributed.
40.7143-74.006

NEW YORK (AP) — Four years ago, an unexpected guest crashed a celebration in Manhattan so he could hang out with U.S. Olympians who were on their way to the London Games.

The president-elect, who also carried the torch in the lead-up to the Athens Games, has been a longtime sports fan and admirer of the Olympics. He also likes winning, which is what has attracted him, over the years, to a U.S. team that routinely dominates the medals.

It would be no stretch then to imagine Trump as a natural supporter of the effort to bring the Olympics back to Los Angeles in 2024.

But Olympic bidding is a contest decided more by secret handshakes than a scoreboard. Though it claims to be above politics, the International Olympic Committee is teeming with them — and many of its 98 members factor in geopolitical considerations when deciding which city to entrust with their most sacred and valuable property, the Olympic Games.

No surprise then that Trump's election sent a ripple through Los Angeles bid leaders. They recognize that if the United States is viewed as an unsteady player on the global stage when the games are awarded next September, it will give IOC members — not historically a pro-American group anyway — one more reason to favor Paris or Budapest over LA.

"We just finished our presidential election and some of you may question America's commitment to its founding principles," American sprinter Allyson Felix told IOC members last week at a Los Angeles bid presentation. "I have one message for you: Please don't doubt us. America's diversity is our greatest strength."

The U.S. government will not bankroll an LA Olympics, which makes it more of a side player when it comes to bidding.

But every bid needs some amount of buy-in from the top, and for a long time, a direct appeal from a head of state was thought to be a key way to bolster a bid. Convinced this was the case, President Barack Obama flew to the IOC's final bid meeting in Copenhagen in 2009 to support Chicago in its attempt to land the 2016 Olympics. He got burned when his home city was the first one eliminated in the voting.

Trump has no apparent baggage with the IOC, and, in fact, an IOC member — American hockey player Angela Ruggiero — is one of a handful of Olympians to appear on Trump's reality TV show "The Apprentice" back in the day. She got fired.

But if there's any real fence-mending to be done, it might be between Trump and the LA bid itself.

Los Angeles Mayor Eric Garcetti, a Democrat with ties to Hillary Clinton, said over the summer that a Trump victory could turn off voters.

"I think for some of the IOC members, they would say, 'Wait a second, can we go to a country like that, where we've heard things that we take offense to?'" Garcetti said.

Trump won, and operatives in the LA bid have had what they've described as "preliminary" discussions with the incoming administration. They have not offered details.

Assuming Trump doesn't impede LA's progress, the IOC could be faced with a choice between two leaders whose populist, nationalist messages have won over voters, while causing some international discomfort: LA's biggest challenger is Paris, and French polling shows far-right presidential candidate Marine Le Pen has a reasonable chance in that country's election next spring. (Budapest, meanwhile, is considered a long shot.)

In considering how much weight to throw behind the Olympic bid, Trump will have to decide which vision of the movement he believes in more.

The IOC, after all, has been long been portrayed as an of out-of-touch, privileged group of backroom deal-cutters not all that different from the "swamp" of overpaid lobbyists and career politicians that Trump said he wants to drain out of Washington.

But for a candidate who won by promising to "Make America Great Again," the chance to surround himself with a group of red-white-and-blue winners and bring the Summer Games back to U.S. soil for the first time since 1996 might seem like too good an opportunity to turn down.