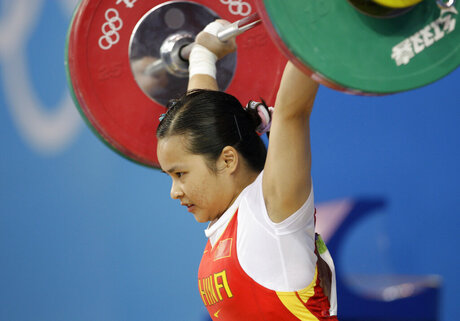 MOSCOW (AP) — China is facing a one-year ban from weightlifting over repeated doping cases in a move which threatens to stop some of the world's top athletes from competing internationally.

The International Weightlifting Federation confirmed Thursday that three failed retests of drug test samples from the 2008 Beijing Olympics will lead to China's automatic ban — if the cases are proven and the athletes in question disqualified by the International Olympic Committee.

IWF spokeswoman Lilla Rozgonyi told The Associated Press that the positive tests for gold medalists Cao Lei, Chen Xiexia and Liu Chunhong, all announced Wednesday, were enough for a ban under rules adopted by the IWF board in June.

"It happens automatically. The vote was already taken so now we only need to receive the closed cases from the IOC to proceed," Rozgonyi said in an e-mail.

China is the world's dominant country in weightlifting, having topped the medal table at every Olympics since 2000. It won seven medals in Rio de Janeiro this month, five of them gold.

Along with China, IWF said that Ukraine and Azerbaijan have joined Russia, Belarus and Kazakhstan, which were already facing one-year bans under earlier announcements.

Wednesday's announcements took Ukraine to three failures from retesting, with four for Azerbaijan. At least six lifters from each of Belarus and Kazakhstan have failed Olympic retests, with seven for Russia.

Between them, those countries won 14 medals in Rio, meaning that next year's world championships in Malaysia could have a significantly depleted field if none of them are allowed to compete.

Russia was already banned from Olympic weightlifting in Rio after the IWF ruled that its numerous doping cases and allegations of a state cover-up had brought weightlifting into "disrepute."

Weightlifting is fighting a severe doping crisis, with as many as 16 medals from 2008 and 13 from 2012 likely to be stripped following failed drug retests. In addition, last year's world championships in Houston saw mass drug test failures and one medal from the 2016 Olympics has already been taken away after bronze medalist Izzat Artykov of Kyrgyzstan tested positive for the banned substance strychnine.