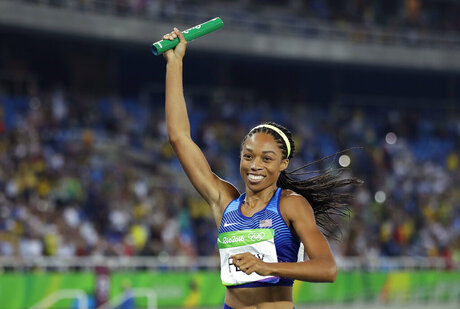 By: STEPHEN WILSON (AP)
DOHA, QatarCopyright 2020 The Associated Press. All rights reserved. This material may not be published, broadcast, rewritten or redistributed.
25.279351.5224

DOHA, Qatar (AP) — Los Angeles sought to allay concerns over Donald Trump's election, Paris played up its glamorous venues and Budapest set itself apart as a mid-sized alternative as the three cities made their first public pitches Tuesday in the race to host the 2024 Olympics.

With 10 months before the vote, the three candidates had a chance to deliver their message in 20-minute presentations to the general assembly of the Association of National Olympic Committees, a gathering of more than 1,000 delegates from around the world.

The meeting occurred exactly after a week after Trump's victory over Hillary Clinton in the American presidential election, a result that could have an impact on Los Angeles' hopes of bringing the Summer Olympics back to the U.S. for the first time since Atlanta hosted in 1996.

Trump's comments during the divisive campaign about Muslims and Mexicans and some of his foreign policy views may not help the California city's chances with some of the IOC's 98 members, who represent a range of nationalities, cultures and religions.

It was American sprinter Allyson Felix, a Los Angeles-born African-American sprinter and six-time Olympic gold medalist, who addressed those concerns during the presentation. Without mentioning Trump by name, her message was clear.

"We just finished our presidential election, and some of you may question America's commitment to its founding principles," Felix said. "I have one message for you: Please don't doubt us. America's diversity is our greatest strength."

Felix said America "needs the games to help make our nation better, now more than ever."

She raised the issue of race and slavery in explaining the history and diversity of the country.

"We're also a nation with individuals like me, descendants of people who came to America, not of their own free will but against it," Felix said. "But we're not a nation that clings to our past, no matter how glorious — or how painful. Americans rush toward the future."

"I believe L.A. is a perfect choice for the 2024 Games, because the face of our city reflects the face of the Olympic Movement itself," she said.

IOC vice president John Coates, of Australia, was among the delegates in the audience and said Felix's words hit the mark.

"I did think Allyson addressed the Trump issue very well," he told The Associated Press. "I think the question was hanging. I thought it was very, very well-crafted."

Los Angeles Mayor Eric Garcetti, a Democrat who was a prominent Clinton supporter, also took up the theme of diversity and openness, saying his city can deliver "transformative" games.

Speaking afterward, Garcetti said an Olympic bid stands on a city's own merits and does not depend on who is the president of the country.

"Today we just reminded people that any nation is made of its people, not one person," he said. "We think that is something that, whether it's Donald Trump or Hillary Clinton, transcends all of us as Americans. I don't think that the Hungarians or the French or the Americans are making their bid plans based on what the national leader says."

"This is our third attempt to host the Olympic Games in the past 10 years and for many reasons ... I must say this is the most remarkable U.S. bid I have ever seen," U.S. Olympic Committee President Larry Probst said. "We have learned many lessons from our previous bids, and failure can be a great teacher."

Paris, which hosted the games in 1900 and 1924, has been considered in a tight race with Los Angeles. The French team stressed the bid's compact nature, with 85 percent of athletes housed within 30 minutes of their venues.

"In Paris in 2024, we will swim in the River Seine," Mayor Anne Hidalgo told the delegates. "We will travel in driverless vehicles. We will celebrate the games on the Champs Elysees, with the Eiffel Tower and all along the Seine from the Grand Palais to Saint Denis."

The Spanish-born Hidalgo cited her own background as an example of what Paris offers.

"To be an immigrant, to be a woman, to have dual nationality and to be able to be mayor of Paris, this city has brought me opportunity and freedom," she said. "Paris has an incredible force."

Budapest, which has never hosted the Olympics and is making its seventh bid, has been seen as the outsider in the race. The Hungarians said they only need to build three new venues and will harness the city center for the games.

Most of all, they said Budapest offers something different.

Under tighter IOC rules, these are the first of only three presentations during the two-year bid race. The second will be at a private technical briefing for IOC members in Switzerland in July, and the third will be the final presentations on the day of the vote in Lima.