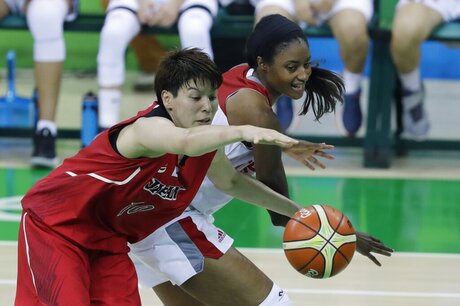 By: TERESA M. WALKER (AP)
RIO DE JANEIROCopyright 2020 The Associated Press. All rights reserved. This material may not be published, broadcast, rewritten or redistributed.
-22.9028-43.2075

That hasn't changed. Not even facing the daunting task of having to pull off one of the greatest Olympic upsets ever and beat the U.S. women's team to keep that dream alive.

"Outside of our team, nobody believes we can do that, but we still believe we can," Japan assistant coach Tom Hovasse said. "If we play our basketball, we're a tough out. If we're shooting like we are ... we're a tough team to beat."

The Japanese were banned by FIBA in November 2014 for allowing two basketball leagues to operate in the country, a violation of the world governing body's statutes. But they rebounded and played their way into their first Olympics since 2004 and fourth overall as the FIBA Asian champs in 2015. So they aren't backing down from any challenge.

"Everybody, all the reporters and everybody's watching, they're probably surprised at what Japan has done," 5-foot-9 forward Mika Kurihara said with Hovasse translating. "We're not. ... We want to do more, and that's the feeling I think for everybody."

The team, filled with speedy shooters unafraid to drive into the lane, already has matched its three victories in 1996 in Atlanta for the most wins in any games. And they even and have a win against the U.S. — in the 1976 Olympics. It was one of the rare losses for the Americans, who are 63-3 all-time in the Olympics, have won 46 straight and looking for a sixth consecutive gold medal.

The Japanese, however, nearly stunned the world's No. 2 team during group play, jumping out to a 16-point lead in the fourth quarter over Australia on Aug. 11. But their legs gave out, and it took 37 points from Liz Cambage to help the Opals pull out the win.

"I hate playing Japan," Cambage said. "I respect the girls. What they lack in height, they make up for in speed and quicks."

Japan's top player, Ramu Tokashiki, plays on WNBA Seattle Storm where she is teammate of Sue Bird and Breanna Stewart.

Geno Auriemma has been impressed with how Japan has competed.

"I don't think there's another team in the world that plays the way they do," the U.S. coach said. "Play as quickly as they do, as crisp together as they play and do as many things as Japan does, I think they are unique in the world in that respect."

China coach Thomas Maher has seen more than enough of Japan not to be surprised at how the Asian nation is playing in these games. The Australian native said Japan sticks to its defensive plan and uses its speed to move the ball well offensively.

"Well, nobody's going to match USA, let's face it," Maher said. "But you know I think Japan have been great for a couple of years now. They're a great team. They play great basketball."