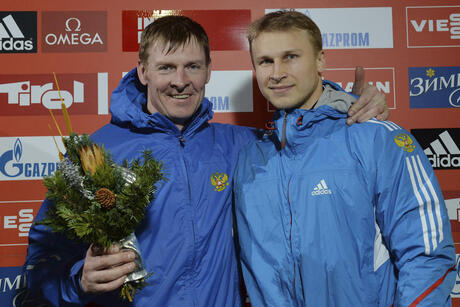 MOSCOW (AP) — A Russian bobsledder who won a gold medal at the 2014 Olympics has been banned for four years for doping.

Dmitry Trunenkov, who won the four-man bobsled at the Sochi Games, tested positive last year and has been banned by the Russian Bobsled Federation, the Russian Anti-Doping Agency said on Tuesday.

Trunenkov said the banned anabolic steroid stanozolol was found in his sample, but denied doping and said he would consult lawyers about a possible appeal. He also suggested the test was faked to discredit Russian sports.

"This substance was used by athletes back in the 80s of the last century and you have to be a complete idiot to use it these days," he said in a statement on the army sports club website. "In my view it's yet another provocation aimed at the whole of Russian sports."

While stanozolol is best known as the substance which cost Ben Johnson his Olympic gold medal in the 100 meters in 1988, it has been involved in recent doping cases for athletes around the world in sports as diverse as weightlifting, baseball, and Champions League soccer. Thirteen athletes, mostly from ex-Soviet countries, have tested positive for stanozolol in Olympic drug sample retests from the 2008 and 2012 Games.

Trunenkov's ban is backdated to April 2016, four months before he retired from competition to focus on his role leading a patriotic youth group set up by the Russian armed forces.

The inquiry into Trunenkov was separate from ongoing investigations into allegations of widespread, state-sponsored doping by Russia at the 2014 Sochi Olympics, which allegedly involved 12 medalists.

RUSADA also announced a four-year ban for race walker Alexander Yargunkin, who tested positive shortly before he was due to represent Russia at the 2015 world athletics championships. Also, rower Yulia Solomentseva, who won silver at the 2014 world junior championships, was given a one-year sanction after being found guilty of failing to make herself available for testing.