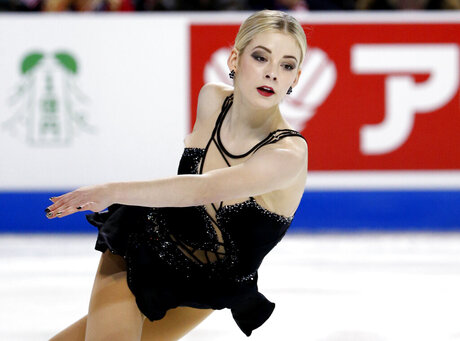 By: DAVE SKRETTA (AP)
KANSAS CITY, Mo.Copyright 2020 The Associated Press. All rights reserved. This material may not be published, broadcast, rewritten or redistributed.
39.0997-94.5786

KANSAS CITY, Mo. (AP) — American figure skater Gracie Gold says she never could have imagined the scope of Russian doping at the Sochi Olympics, even though it ultimately could land her on the podium three years later.

Gold finished fourth at the Winter Games, while Adelina Sotnikova won a surprising gold for the host nation. But since then, the event has become embroiled in controversy, with a report last month from anti-doping investigator Richard McLaren detailing widespread doping by the Russian team.

The IOC has announced that 28 unidentified athletes across a variety of sports currently are under investigation, and Italian newspaper La Gazetta dello Sport reported that Sotnikova is among them.

If she were to be stripped, South Korea's Yuna Kim could be elevated to the gold medal, which would be her second in a row at the Olympics. That would give Italy's Carolina Kostner the silver and Gold would be awarded bronze.

"As far as I know, everything is still under investigation, so I can't really speak to that," Gold said during a conference call Thursday, as she prepared for next week's U.S. championships.

"I've always chosen to skate clean," Gold added. "I do believe doping is unfair to all the other athletes. That's kind of what I have to say about that. I've always chosen to compete clean and compete my best as a clean athlete. It's certainly causing some headlines, though."

There has been more fallout from the McLaren report this week.

The Russian anti-doping agency remains suspended following allegations of corruption, which includes the cover-up and swapping of illicit samples during the Olympics in Sochi.

Russia came away from Sochi with an impressive medal haul in figure skating. Along with Sotnikova's gold medal, the team of Tatiana Volosozhar and Maxim Trankov took gold and Ksenia Stolbova and Fedor Klimov took silver in pairs, and the Russian squad captured gold in the new team event.

Canada earned silver and the Americans took bronze in the team event.

As for Sotnikova, she has struggled mightily since the Sochi Games. She did not participate in the Grand Prix series last fall, and said last month that she would not compete at the Russian national championships, ruling her out of this year's European or world championships.

"I competed against Adelina for many years," Gold said. "I loved her. She's still a sweetheart. I've done shows with her. A lot of Russians, I've found them to be kind of lovely people despite the stigma" of doping that has become associated with them.